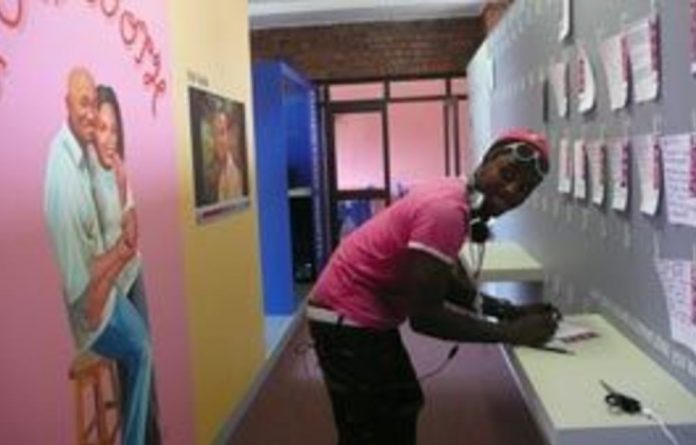 Hotel Yeoville is not actually a hotel. Artist Terry Kurgan and collaborators instruct visitors to a website that their site-specific intervention, housed at the Yeoville library, is to be a chronicle of experience. Yeoville residents are encouraged to “tell stories of Jo’burg, home, loss, love and longing”.

The public art project was launched last May and has been developed by Kurgan in partnership with Wits University’s Forced Migration Studies Programme. Other collaborators include interactive digital media developer Tegan Bristow, who will hold the key to the design of the self-documenting applications. These are to be housed in temporary booths in the library’s study area.

Architects Alexander Opper and Amir Livneh of Notion Architects are responsible for transforming the concept into a “real-space and real-time exhibition experience”. Congolese painter Guylain Lutu Ndengo, who produces city signage, has decorated the wooden booths in gaudy colours.

The project makes extensive and appropriate use of the internet. We’re told that internet penetration in Yeoville is deep and one can witness something like 30 to 40 internet cafés in four blocks. A multimedia dimension includes webcams, cameras and social networking platforms such as YouTube and Facebook.

By using an interactive map of the continent, participants can “map their roots and journeys across Africa and beyond”. In the booths — which are not grimy like ones in the internet cafés I have used downtown — visitors can take pictures of themselves, which will be uploaded on to the project’s website.

Ndengo’s signage includes a list of questions in each booth asking basic things, such as “Tell us how you came to Yeoville”, or giving instruction, like “Sing a traditional song”. In this way a short movie could be made for YouTube.

But it’s not all fun and games. The team has tried to make the portal functional by making it possible to “find the number of a legal advice service” or even “connecting with fellow refugees from the motherland”. There is also a platform for finding accommodation through an online notice board of classified adverts.

The involvement of the Forced Migration Studies Programme and the location of the project in one of Johannesburg’s most cosmopolitan suburbs (65% of the residents are not South African) is suggestive of what the project is really about: “Hotel Yeoville aims to address themes of migration, the idiosyncrasies of place and the threat of xenophobia by tapping into the vital role of the internet as a diasporic hub,” says Kurgan.

Hotel Yeoville is also about upsetting mainstream narratives about the migrant. “Most images of displaced people are very tired and predictable in their storylines, depicting them as desperate, weak and violated. These caricatures don’t tell us anything about the people in the picture,” says Kurgan.

She says the genesis of the project happened in Joubert Park in 2004. “I was working on a project called Park Pictures,” Kurgan says. “It comprised 40 portraits and brief histories of the resident park photographers, an aerial map marking the intensity of their inviolably fixed working positions and a large collection of photographs that had never been claimed by their clients. I was fascinated by how their collected work, over many years, had also become an extraordinary informal ‘social history’ archive that articulately documented the shifting demographics and transformation of this fragmented city.

“I came into contact with many people who have come to live in Johannesburg from elsewhere on the continent. Their stories inevitably described harsh experiences of marginalisation and discrimination.”

A year later, on a photographic commission in Yeoville, Kurgan was struck, not only by the presence of African immigrants, but also by the extraordinary levels of education, entrepreneurial skills and the tendency to take risks that they have brought with them.

She began to think about collaboration that might reflect and make visible the ordinary experiences of these people. “I find the xenophobia that has emerged in the past number of years truly abhorrent,” Kurgan says. “Official and popular responses to immigration are in such stark contrast to the inclusive and high-minded principles of our Constitution. African immigrant communities who come here are denied opportunity and are neglected by the South African community at every level.

“I wanted the project to reflect this largely invisible community and to try to put a different conversation about foreigners into the public sphere — one that is more ordinary and less extreme than the prevailing public discourse of xenophobia.”

At this early point of the process Kurgan is looking ahead, eagerly speculating about what might happen to Hotel Yeoville.
“We will look at what has been made in six months time,” she says, before expressing hope that if it succeeds it may attract a sponsor organisation or individual or organisation willing it take it on for the long haul.

“This is a large community with significant spending power — there is certainly real commercial opportunity here too, down the line.”

Finally, Kurgan claims, confidently: “It’s been suggested that we franchise the idea.” Hotel Yeoville shows the possibilities that manifest when one combines high art and human tragedy with popular culture.