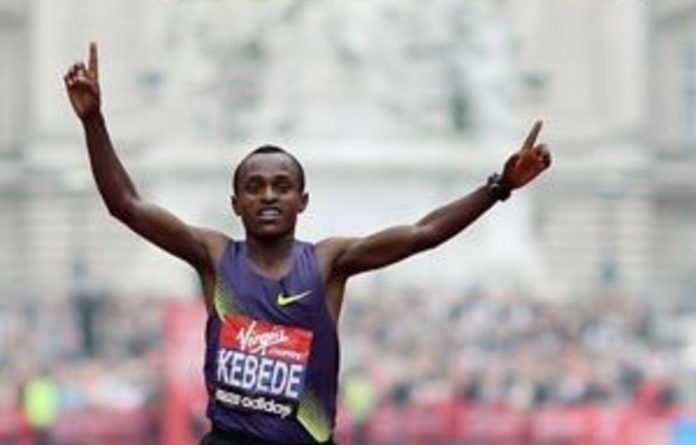 Tsegaye Kebede of Ethiopia, last year’s runner-up, won the London Marathon for the first time on Sunday to end Kenya’s six-year grip on the race.

Kebede won in a time of two hours, five minutes and 19 seconds after passing Kenya’s Emmanuel Mutai, the runner-up.

Olympic bronze-medallist Kebede was always in contention and split the field in the final stretch of the 42,2 kilometres course.

His break saw Kebede finish comfortably ahead of world silver medallist Mutai (2:06:23), with Gharib further back in 2:06:55.

“The rain wasn’t very nice — it made my pace a little bit slow and because of that I had a few problems in my legs,” said Kebede.

“I was second last year so it is good to win. Maybe next year without the rain I can run 2:04.”

The women’s race saw a Russian one-two with Liliya Shobukhova winning from compatriot Inga Abitova in a time of 2:22:00.

Abitova was some 19 seconds behind with Ethiopia’s Aselefech Mergia third in 2:22:30.

Defending champion Wanjiru fell out of contention at the halfway mark with a knee injury.

“When I started there was no pain and I felt in good shape,” said the 23-year-old. “I was confident about winning but you can’t predict the body.

“I started to feel pain about 20km and it became very serious.”

“Travelling here was very hard and maybe that affected my knee,” added Wanjiru. “I wasn’t comfortable sitting on the plane all that time.

Wanjiru had forecast in the build-up that Kebede would provide the greatest threat to Kenya’s dominance of the race and he was proved correct.

“Kebede did a good job today, It was a good day for him,” Wanjiru said.

“Also the pacemakers were not so good today. It was too slow and I couldn’t get a good rhythm.

“Now I will go to Italy for two or three weeks’ treatment. I feel bad because this is the first time I haven’t finished.

“I was just thinking about hanging on and finishing in the top 10 but I didn’t want to make the injury worse.”

Kenyan world champion Abel Kirui and Mutai, a world silver medallist tried to maintain their country’s winning streak in this race but there was no denying Kebede, who won by 64 seconds.

The result of the women’s race meant Shobukhova has now won two of her three marathons after triumphing in Chicago in October and finishing third in her debut in the distance in London last year.

“The rain was no problem — it was in and out which made it almost perfect conditions,” Shobukhova said. “I ran this course last year with no problems and that helped me this year.

“The pace was easy but I decided to push in the second half to break up the pack,” explained the 32-year-old European 5 000 metres track record holder.

Germany’s Irina Mikitenko was bidding for a third straight title but she dropped out at the 18km mark with a leg injury.

“I felt a muscle problem in my lower shin muscle after 5km,” said Mikitenko. “The slippery roads made it worse and I first stopped running after 15km before pulling out.”

Meanwhile Britain’s Mara Yamauchi, last year’s runner-up, could only finish in tenth, having taken six days to reach London from her United States training base because of travel disruption caused by the Iceland volcano eruption.

“It was just a combination of the journey here and having been injured last year that maybe I wasn’t as prepared as I was last year,” she told the BBC. “The journey to get here tired me out a bit more than I thought.” — AFP

Investing in education as a global common good

High-stakes choices today, transforming education for tomorrow. Covid-19 must be used as a catalyst to strengthen health and education
Read more
Africa

In a few weeks, when the rainy season arrives, water will finally begin to flow into the Grand Ethiopian Renaissance Dam. Expect regional tensions to rise along with the water level
Read more
Advertising
Continue to the category
Education