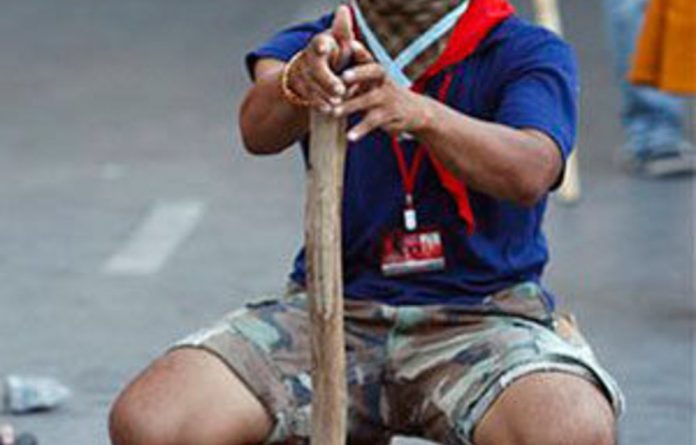 Fears of civil conflict grew in Thailand on Tuesday after anti-government protesters stopped police from moving to Bangkok and rivals threatened to take matters into their own hands if leaders did not restore order.

Thailand’s revered King Bhumibhol Adulyadej made a rare appearance on television at a ceremony to install judges late on Monday. The ailing monarch made no direct comment on the political troubles but expressed a general desire for order.

“I believe if you provide a good example as judges, it will give the public the example to work and follow their duty strictly and honestly,” he said at the ceremony.

Hopes for an end to a seven-week stand-off that has paralysed Bangkok and killed 26 people were dashed at the weekend when Prime Minister Abhisit Vejjajiva rejected a proposal by the protesters for an election in three months.

The red-shirted protesters have fortified their encampment in an upmarket Bangkok shopping area and encouraged more reinforcements overnight, knowing that some among the authorities fear the repercussions of a crackdown that results in more death.

Overnight, hundreds of “Red Shirts” massed on the Vipavadi-Rangsit road, a main thoroughfare into the city in the northern suburbs, in an attempt to stop the army and police bolstering their forces, although some army trucks got through.

Red Shirts stacked tyres on the platform of the Chidlom rail station by their protest site, apparently worried troops would try to use the elevated system to attack them from above.

As a result, operating company BTS closed down the network, adding to the congestion on Bangkok’s famously crowded roads.

“They threatened to throw the tyres down on the track so we had to close all of the routes for safety reasons,” a public relations official at BTS said, adding the company was negotiating with the protesters to clear the station.

Economy suffering
Analysts say the deadlock and a possible deterioration in law and order could continue for weeks.

Concern is growing about the impact on businesses and the economy, with consumer confidence flagging and the tourist industry suffering, especially in the capital.

The stock market has been volatile, despite a good start to the quarterly results season. “The political situation looks worse,” broker Phillip Securities said in a note. “Investors will take quick profits and turnover will be cautiously thin.”

Army spokesperson Sansern Kaewkamnerd distributed a chart late on Monday showing the names of people the authorities said were involved in a network to undermine the monarchy.

The government has suggested members of the Red Shirt movement may have a republican agenda in a country where the king is regarded as semi-divine. The Red Shirts deny this.

Thailand has a strict lèse majesté law that restricts discussion of the country’s monarchy.

The 82-year king, who has been in hospital for seven months, has stepped in to help resolve past political crises, the last time in 1992. But the monarch, considered a powerful symbol of unity, has made no public statements about the current deadlock.

The mostly rural and urban poor Red Shirts have set up half a dozen blockades in their north and north-east strongholds, another headache for the Oxford-educated Abhisit, who faces pressure from the urban middle class to take a harder line.

Hundreds manned roadblocks in at least three north-eastern provinces and around Bangkok to prevent security forces from entering the capital ahead of what protest leaders said was an imminent crackdown. Local television footage showed protesters carrying out searches, even on soldiers.

A rival group known as the “Yellow Shirts” said they would gather on Thursday outside the army barracks where Abhisit has a temporary office to urge authorities to disperse the Red Shirts. They called for martial law in lawless areas of the country.

“It’s anarchy and the government needs to do something to end that,” said Suriyasai Katasila, a Yellow Shirt leader.

The Yellow Shirts vowed to take action if the Red Shirts are not dispersed. They are well versed in street protests, having besieged the prime minister’s office for three months and taken over Bangkok’s airports for eight days in 2008.

Analysts say a well-armed rogue military element led by retired generals back the protesters and is allied with the Red Shirts’ de facto leader, Thaksin, who was ousted in a 2006 coup.

The Red Shirts say Abhisit came to power illegitimately in 2008, heading a coalition cobbled together with the help of the military, after a pro-Thaksin government fell when a court dissolved a party affiliated with him. — Reuters

An email to His Majesty, King Mswati III of eSwatini