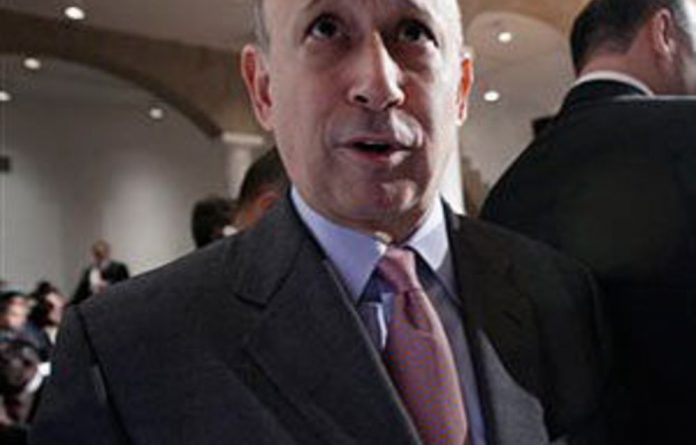 Embattled Goldman Sachs boss Lloyd Blankfein will tell lawmakers it did not bet on the collapse of the housing market when he is dragged over the coals by a Senate investigation panel on Tuesday.

Blankfein will tell the Permanent Senate Subcommittee on Investigations that Goldman lost $1,2-billion from housing-related investments, as he tries to salvage his firm’s reputation.

The financial giant faces fraud charges for misleading investors about mortgage-backed products and has been accused of making “short” bets that the housing market would collapse as thousands of Americans were forced from their homes.

Lawmakers on Sunday released emails apparently showing that Goldman had in fact profited from the crisis.

“Of course we didn’t dodge the mortgage mess,” Blankfein told staff in a 2007 email released by the US Senate, “we lost money, then made more than we lost because of shorts.”

According to prepared testimony, Blankfein will say that “during the two years of the financial crisis, while profitable overall, Goldman Sachs lost approximately $1,2-billion from our activities in the residential housing market”.

He will also say that Goldman did not “consistently or significantly” bet against the housing market.

“We didn’t have a massive short against the housing market and we certainly did not bet against our clients.”

Sophisticated business partners
Blankfein, who guided Goldman through the financial crisis and a $10-billion government bailout, is sure to face questions about the charges brought by the Securities and Exchange Commission (SEC).

The SEC has claimed Goldman allowed a prominent hedge fund to help put together a package of subprime mortgages that were sold to clients, but which the fund was at the same time betting against.

The company has denied any wrongdoing.

He will also try to stress the role of investment banks in keeping the economy ticking over.

“Many Americans are sceptical about the contribution of investment banking to our economy and understandably angry about how Wall Street contributed to the financial crisis.

“These functions are important to economic growth and job creation.” — AFP