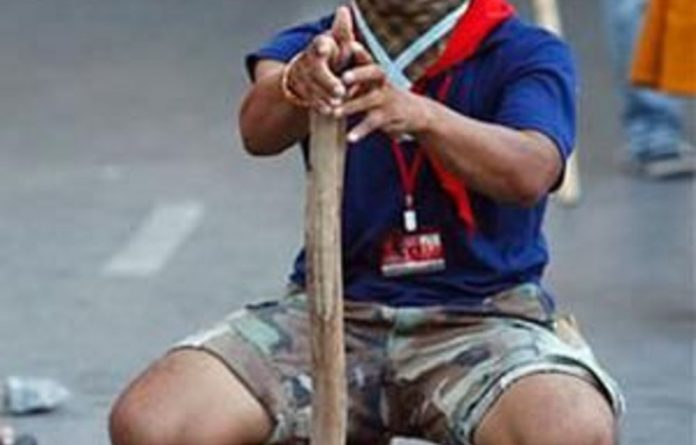 Protesters in Thailand pushing for early elections threatened mobile rallies across Bangkok on Wednesday in defiance of a state of emergency, which would increase the risk of clashes with troops or rival protest groups.

The capital was relatively calm overnight and the number of demonstrators at the “Red Shirt” rally in an upmarket shopping district of the capital was little more than 1 000 at dawn, a Reuters photographer said.

That was much smaller than more recently in the seven-week protest movement, when fears of a military crackdown were intense, but Reuters reporters said the anti-government protesters had fortified barricades around the site overnight.

Cooking gas canisters were added to a huge barricade on the edge of the Silom business district to deter troops from firing in that direction and bottles filled with fuel were added to another, Reuters reporters said.

Some barricades were already doused with fuel last week.

Troop movements were reported in central areas of Bangkok late on Tuesday and army spokesperson Sansern Kaewkamnerd said some were “training” for an eventual dispersal of the protesters.

“We are maintaining checkpoints at several places as well to check for arms and prevent more people from going in to gather,” he said.

The Red Shirts have in turn mobilised to prevent troops moving on main roads into Bangkok and in some northern provinces.

Hopes for a negotiated end to the crisis, in which 26 people have been killed and hundreds wounded, were dashed at the weekend when Prime Minister Abhisit Vejjajiva rejected a proposal by the protesters for an election in three months.

Abhisit said late on Tuesday the army had no plan to impose martial law.

“From my discussion with the people responsible and the people who have powers, they have no intention of declaring martial law at the moment,” he told BBC World News. “We are aiming to restore order as soon as possible.”

Protesters forced Bangkok’s elevated railway to shut for four hours in the morning rush hour on Tuesday to stop any attempt by troops to use a station near their rally, but there was no repeat on Wednesday and traffic was no more congested than usual.

Political solution needed
Many in the army, which led a failed operation against a Red Shirts rally on April 10 when 25 people were killed and 800 wounded, do not want to be dragged into battle with civilians.

“The army would rather see the government exhaust political means first,” a military source said on condition of anonymity.

“We need to prevent trouble from spreading and containing the unrest, but actually ending it altogether would be very difficult without a political solution as well.”

Adding to the volatile mix, groups opposed to the Red Shirts — and the loss to business and livelihoods the protests have caused in Bangkok — have held rallies in the capital and want to see the Red Shirt encampment broken up.

The Red Shirts, who back ex-premier Thaksin Shinawatra, ousted in a 2006 coup and say Abhisit came to power illegitimately, want to explain their demands to the residents of Bangkok with rallies in several undisclosed parts of town.

“We will distribute pamphlets and create understanding among Bangkok people about what we are doing,” said Kwanchai Praipanna, a Red Shirt protest leader. “If the troops stop us, we will break through roadblocks.”

Deputy Prime Minister Suthep Thuangsuban vowed action to prevent that. “It is clear the protesters are not gathering peacefully. We will not be lenient with these people any more.”

Analysts say the deadlock and a possible deterioration in law and order could continue for weeks, damaging South-east Asia’s second-biggest economy, with consumer confidence flagging and the tourist industry suffering, especially in the capital.

On Tuesday, the Cabinet approved measures to provide relief to businesses affected by protests, a government spokesperson said.

Thaksin, a former telecoms tycoon revered by the poor and reviled by Bangkok’s elite, was convicted in absentia on corruption-related charges and lives abroad to avoid jail. — Reuters

ALL OUR CORONAVIRUS COVERAGE Boxing and women’s football qualifying for the 2020 Olympics will be moved from the...
Read more
Africa

For a few dollars tourists can get framed photos at the site, pick up posters of the footballers and take home a souvenir t-shirt
Read more
Africa

Sudan: A chance for the AU to refine support for countries in crisis

The killing of protesters by the Sudanese military signifies its reluctance to hand over power, as demanded by the African Union
Read more
Africa

Sudan military offers to talk after 60 die in protest crackdown