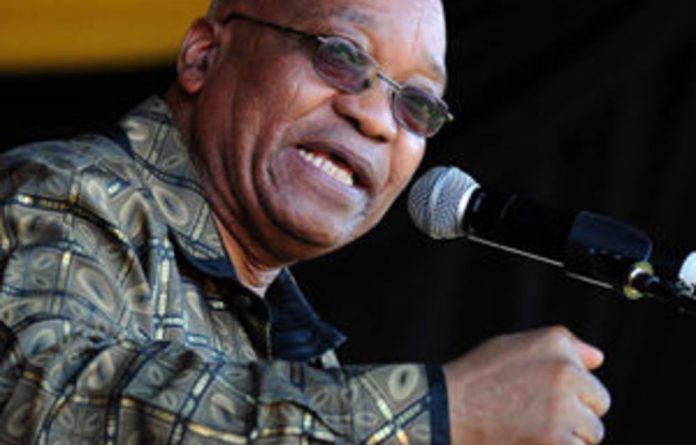 Members of the tripartite alliance were not there to please one another, President Jacob Zuma said at a May Day rally at the Sahara Stadium north of Durban on Saturday.

Zuma said the tripartite alliance — the Congress of South African Trade Unions (Cosatu), the South African Communist Party (SACP) and the ANC — were there to take the struggle forward.

“Workers vote for the ANC because they know it is in their interest to do so,” he said.

He went on to say that without the alliance, both the ANC and Cosatu would be weaker.

Zuma told the crowd of thousands that the government was implementing policies that would create an environment for more labour-intensive practices.

“When a farm owner dies it makes international headlines. When a farm worker dies it does not make headlines … these make it look as if lives of farm workers were not important,” Dlamini said.

He also said if the issue of labour broking was not addressed by October, Cosatu would go on a strike on October 7.

There was chaos at the rally earlier when union members demanded to see Zuma, who was seated at the stage.

When the members were eventually allowed to sit on the stadium’s field, they jumped off the stands and ran to the field to be closer to Zuma.

Call for stronger leadership
Cosatu said earlier said it would be using May Day to demand stronger leadership from the ANC, and that corruption was “tantamount to stealing from the poor and must be fought wherever it occurs in the public and private sectors, as well as within our unions”.

“Those who step outside the discipline of the organisation must be dealt with irrespective of the positions they hold,” said the union in a statement.

National Union of Mine Workers (NUM) spokesperson Lesiba Seshoka said that they were embarking on a campaign to fight corruption.

“We must expose corruption at all costs so that the money that should be directed to the poorest of poor is not stolen by “tenderpreneurs” and people relying on government contracts,” he said.

“Labour broking is one of the biggest challenges that we are facing today where we find that our workers are employed as slaves,” Seshoka said.

“We believe that 16 years into freedom, our workers have not benefited much compared to the super exploiters of this country.”

The National Council of Trade Unions (Nactu), accused the government on Saturday of failing to protect workers from their employers.

“It is the lowly paid workers who are unskilled, whose blood continues to be sucked by these vampires — labour brokers,” the council of unions said in a statement.

Nactu also argued that a social-protection policy was essential for the well being of South African workers.

“Social protection can and should cover such basic needs as housing, health and the food security of all workers and citizens.”

“It stands to reason why Nactu has resolved to campaign for social protection for all in order to address the worsening levels of poverty and inequality that we are witnessing in our country,”
the body said. – Sapa