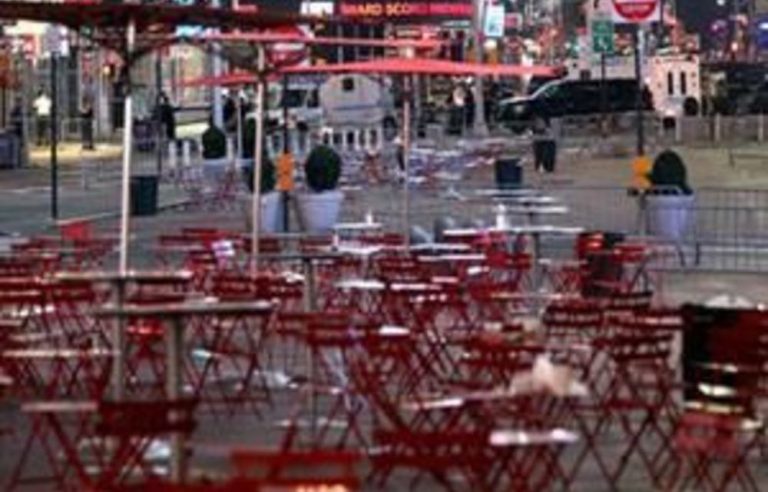 Police tipped off by an alert street vendor found and defused a car bomb inside a sport utility vehicle in an incident that forced the evacuation of New York’s Times Square on Saturday and could have turned into a “very deadly event,” authorities said early on Sunday.

New York Mayor Michael Bloomberg told a news conference that “we have no idea who did this and why”. He said the bomb appeared to have been made in an amateurish manner.

Times Square is a popular tourist destination in Manhattan’s Midtown.

“We are very lucky. Thanks to alert New Yorkers and professional police officers, we avoided what could have been a very deadly event,” Bloomberg said.

He said an alert T-shirt vendor noticed “an unoccupied suspicious vehicle” and alerted a mounted New York police officer, who observed that the SUV had smoke emerging from vents near the back seat and smelled of gunpowder.

The bomb was discovered in a dark green Nissan Pathfinder parked on 45th Street and Broadway with its engine running and hazard lights flashing, authorities said. It had Connecticut license plates that did not match the vehicle.

Kelly said police bomb technicians removed and dismantled three propane tanks, consumer-grade fireworks, two petrol containers and two clocks apparently used as timers, along with electrical wire and other components in the rear of the car.

New York has remained on high alert for another attack since the September 11, 2001 attacks in which hijacked airliners toppled the World Trade Centre’s twin towers.

US President Barack Obama commended the “quick action” by New York police in dealing with the incident and said the New York Police Department had done “excellent work” in responding.

A New York police officer, who did not give his name because he was not authorised to speak to the media, said a man was seen fleeing the car and that Times Square was evacuated in case there were other devices.

In Washington, FBI spokesperson Richard Kolko said the Joint Terrorism Task Force has responded along with the NYPD.

Eerily empty
A US official, who asked not to be identified by name, said the US Department of Homeland Security was aware of the situation and was monitoring developments, but declined to comment further. The official said the New York Police Department was in charge of the investigation.

Times Square was eerily empty for several blocks on Saturday night, the busiest night of the week on the Great White Way as tourists and theatre-goers watched from behind barricades as anti-terrorism units swarmed the scene.

Don Slovin, watching the police through the window of a souvenir shop a block from the SUV, said, “Of course it conjures up memories of 9/11.”

The SUV was parked very close to a production of the show The Lion King on 45th Street. Women in evening gowns were among the crowd on one of the warmest nights of the year and the busiest night of the week for Broadway theatres.

“It’s New York. If you’re from New York you just get used to it,” said Creswell Rudolph (37) a bank security guard stationed a block from the SUV. “It could have been a lot worse.”

“With this, it’s just lucky they found it in time. Thank God for that,” he said.

Vehicle and pedestrian traffic was very heavy on streets outside the evacuation zone, including Sixth and Eighth Avenues. All intersections in the area were blocked by police and fire department vehicles, lights flashing.

Police shut down Times Square from 43rd street to 48th street between Sixth and Eight avenues.

Tourists in the area expressed annoyance and amusement. Nam Vu (24) said he had arrived by bus in New York at 8am from Canada and was prevented from meeting a friend at the Marriott Marquis on Times Square.

“I feel like I’m on a TV show,” he said. “Where is Denzel Washington?” – Reuters