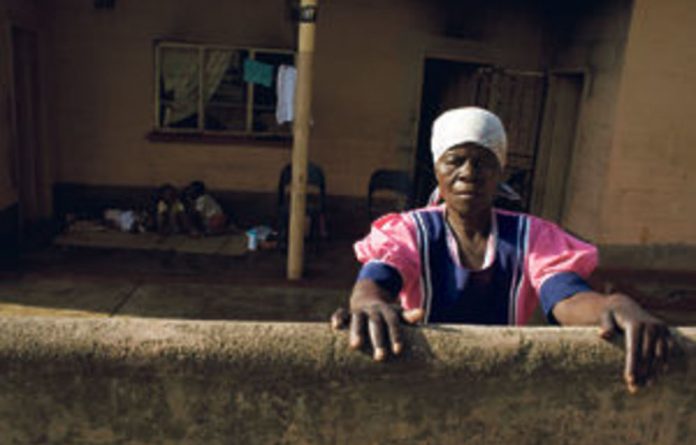 On a hot afternoon, when sunlit showers have cooled the dust beneath, it is hard not to imagine this place as the idyllic confluence of African earthiness and the global modernism the World Cup was supposed to bring to the country.

Yet Mathebula’s memory of the day in October last year when police invaded her home and beat the 68- year-old with a gun butt tells another story: ‘They came in, shooting rubber bullets everywhere — without warning. I went to the gate because I was looking after my 11 grandchildren [and great-grandchildren] and I was worried for them; that’s when they hit me here,” says Mathebula, pointing to just below her ribcage. ‘I’ve never seen the police behave like that before.”

The police invasion of Mataffin followed yet another protest by community members and their children who, in 2007, had been evicted from the nearby Cyril Clarke primary and John Mdluli secondary schools. The buildings were used as offices for the construction company working on the stadium and will, during the World Cup, be used as Fifa’s Nelspruit offices.

The October attacks followed the torching of a police squad car during the protest. Anger had long been fermenting in Mataffin. After their eviction, the township’s school-going children were moved to temporary tin structures with the promise that construction on the new schools would run parallel to that of the stadium. It did not happen.

Instead, several attempts to contact the provincial department of education were ignored until December last year, when the sod-turning for the new schools finally took place. Now, both are close to completion.

Andries Sibiya, a 22-year-old unemployed soccer enthusiast wearing a Bafana jersey, took part in the protest. He said the incident has left a bitter taste that remains with the community: ‘The government put entertainment before education in building the stadium. We kept asking: ‘When will the new schools be built?’ But we didn’t get any answers.”

At one of the temporary schools, the football page of a national newspaper flaps over the broken window it covers. The air conditioning in the classroom is broken, the fans have been vandalised and the walls are daubed with graffiti.

The Mbombela stadium’s chief architect, Mike Bell, is effusive about the ‘power of stadiums” and that this one’s ‘wildest African” design will add to the ‘experience and memory of the experience” during the World Cup.

With its 18 giraffe pylons, zebra design seating and sinuous green walkways, the stadium is drenched in symbolism and rooted in its locality. The nearby Kruger Park, with its promise of the Big Five, is an obvious reference.

But it also stands as a monument to the poisoned chalice that has become South Africa’s hosting of the World Cup. Blood is mixed into the bricks and mortar of Mbombela stadium.

Rumours of a political hit list have circulated in this gorgeous corner of South Africa after provincial arts and culture spokesperson Sammy Mpatlanyane was shot in his bed in January. This followed last year’s assassination of Mbombela municipality speaker Jimmy Mohlala. Both were considered ‘good guys” intent on clean governance.

Mohlala was due to testify in the disciplinary hearing of former municipal manager Jacob Dladla, who was fired after being found guilty of financial mismanagement relating to the tenders for the stadium’s construction.

Mbombela executive mayor Lassy Chiwayo said the announcement of the city as a World Cup host had seen an intensification of the ‘worst alien tendencies within the [majority] ANC”, including corruption, tenderpreneurship and factionalism based on avarice and power-seeking — all with an eye on the financial gain to be milked from World Cup tenders.

In a frank interview with the Mail & Guardian this week, Chiwayo said that ‘forces within the party in the province — representing business interests rather than those of the people who voted for the ANC — were working to consolidate their position to make money from the tournament from very early on [through access to dispensing tenders].

This we see from the systematic deployment of certain people to positions like [those of] the municipal manager and the chief financial officer within the municipality.” This, said Chiwayo — whose own name is rumoured to have been on a hit list — was the backdrop against which the killings occurred.

If the Mbombela stadium stands on the grave of a tarnished World Cup dream that has seen alleged political hits being made ‘in the name of greed”, it is also, on a local level, a prism through which to view the power-induced malaise afflicting the ANC government.

This is something that Chiwayo believes ‘the party is vulnerable to, but [is] up to the challenge of overcoming”. But in those coffins lie other corpses, including that of government sensitivity towards citizens and their human rights.

In an earlier interview with the M&G‘s Matuma Letsoalo, Mohlala’s widow, Bonnie, related how the officers investigating her husband’s murder went about it: ‘They have a bad attitude — They beat people. They assaulted me.

I thought I was going to die. They tortured us [Mohlala’s wife and her children] during the interrogations. They covered our faces with plastic bags, before they started beating us at my house,” she said.

Sitting on her stoep, Mathebula looks wistfully at the orange giraffes: ‘I would like to go there, but tickets are too expensive,” she says. Despite living so close to the stadium, Mathebula, like many in her community, remains far from the World Cup dream.