Freedom Charter rescued from auction in the UK 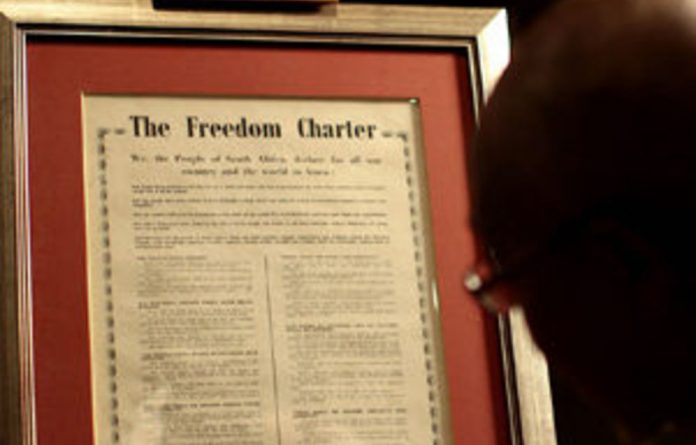 The original, signed South African Freedom Charter, as adopted at the Congress of the People in Kliptown in 1955, was handed over to the government on May 7 by the Liliesleaf Trust in Johannesburg, after it was saved from going on auction in the United Kingdom.

The charter was bought from UK auctioneers Bonhams for £60 000, after Nic Wolpe, the Liliesleaf Trust’s CEO was contacted by the National Archives — just days before the auction — asking if he could help save the historic document.

“Whomever may have purchased it — because there were five interested parties — could have easily slipped it into his suitcase and left the country and we would not have been any the wiser, Wolpe told the M&G.

The Liliesleaf Farm, once the headquarters of Umkhonto weSizwe — the military wing of the ANC and the Congress Alliance — holds a position of esteem among struggle landmarks in South Africa.

Deputy President Kgalema Motlanthe received the charter on behalf of the nation at the Liliesleaf Farm on May 7 and handed it over to the Minister of Arts and Culture Lulu Xingwana.

“The progress, or lack thereof, is measured against the Freedom Charter,” Motlanthe told those present at the handing over ceremony.

“The Freedom Charter has literally shaped, influenced and inspired all of our endeavours. It inspired struggles by the youth, learners, workers, peasants and farmworkers over the years. Even those who were not yet born in 1955 got to embrace the Freedom Charter as their political programme,” Motlanthe said.

The Freedom Charter became a powerful force in uniting people of all races in a common struggle for the elimination of apartheid and the establishment of a non-racial democratic state. Xingwana described the Freedom Charter as the most important document to be produced in South Africa.

“The National Archives will take the responsibility to preserve the Freedom Charter and I want to assure the deputy president and the nation that we have developed a programme that will ensure that all South African’s can see this historic document and also have the opportunity to study its importance in our history, particularly our young children at school,” she said.

Xingwana thanked Wolpe for responding to the National Archives’s appeal for assistance and for running the group of public-spirited supporters who rescued the document on behalf of the nation.

New struggle is for tolerance
Also present at the ceremony was Dennis Goldberg, who was accused number three in the Rivonia trial.

The Rivonia trial took place between 1963 and 1964 and saw 10 leaders of the ANC tried for 221 acts of sabotage, which were planned with a view to overthrowing the apartheid government.

Nineteen ANC leaders were arrested at their hideout at the farm in Rivonia, which was privately owned by Arthur Goldreich.

“It’s quite exciting because the Freedom Charter really was our political compass all the years of the struggle,” Goldberg told the M&G.

Goldberg, who spent 22 years in prison, admitted that the South Africa he had fought for had not turned out the way he had envisaged.

“South Africa’s new struggle is for tolerance,” he told the M&G.

“I think we have come a long way, we just have got more ways to go, so I am confident about our future. We are a country of many cultures, now we have to become a nation of one people.”