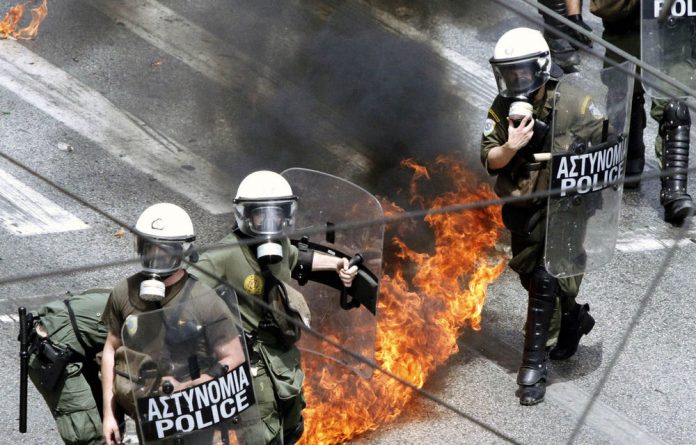 At 2.03pm on Wednesday, on the third floor of a neoclassical building in the heart of Athens, three people died — and Greece changed.

As the bank employees tried to beat back the flames, ignited by a firebomb tossed into the building by protesters, the economic crisis enveloping the debt-stricken country not only claimed its first lives, it also shifted from bewilderment and disappointment into violence carried on an unpredictable current of rage.

The young bank employees, a man and two women, one of them four months pregnant, died in the fire that came within an hour of irate protesters laying siege to the Greek Parliament.

“All of us are angry — very, very angry,” bellowed Stella Stamou, a civil servant standing on a street corner, screaming herself hoarse near where the bank had been set alight.

Across Athens this week the signs of that anger were everywhere: in the central boulevards and squares that resembled a war zone, the burning cars, the burning hotels, the burning government buildings and rubbish bins and the shattered windows and pavements.

Surveying the debris, Karwan Ahmet, a 28-year-old Iraqi Kurd caught up in the chaos, described the scene as “being straight out of Iraq. It reminds me of all the shit we saw in Kirkuk.”

What had started as a general strike called by unions to protest against deeply unpopular austerity measures turned into a tidal wave of fury as an estimated 100 000 private and public-sector workers took to the streets, screaming: “Let the plutocracy pay.”

By midday that rage had assumed a new and determined dynamism as demonstrators — including once-stalwart supporters of the governing socialist Pasok party — began to shout “thieves, thieves”.

Their venom soon turned towards the large sandstone building that is the Greek Parliament. After scuffling with police, chasing the ceremonial guards away from the Tomb of the Unknown Soldier and taking axes to the monument, hundreds tried to storm the building, screaming: “Let the bordello burn.”

As MPs inside debated the draconian economic reforms that eurozone nations and the IMF have demanded in return for the biggest bailout in history, riot police outside fired off rounds of acrid teargas to keep the crowd at bay. “All of them are dirty and have eaten from the trough,” said one man, brandishing a large wooden club. “Our politicians are squarely to blame and the worst of the culprits know it because they have fled the country.”

With Greece facing a May 19 deadline to refinance its staggering €300-billion (R2,9-trillion) debt, the EU and IMF agreed last week to inject up to €120-billion into its cash-starved coffers on condition that Athens makes unprecedented budget cuts.

The tough regime, which also includes a freeze on public-sector wages and pensions in addition to tax hikes, has not been seen since the country emerged from the privations of civil war in 1949.

“Why should we, the little man, pay for this crisis?” said Giorgos Didimopoulos, a 55-year-old jeweller who belongs to a communist-backed union that on Tuesday stormed the ancient Acropolis to make precisely that point.

“What people forget is that we Greeks don’t like authority. We have always resisted when we think something is unfair. We fought against the Persians at Marathon, the Germans during World War II and we will fight the IMF because, in reality, we no longer have a government. It is foreign forces who are in charge of us now.”

Polls show that he is not alone. The perception is growing that it is low-income Greeks, already hit by austerity measures, who are suffering disproportionately from the three-year fiscal and structural programme. In repeated surveys the vast majority said they will take to the streets to oppose the “barbaric” measures. For many this week’s violence is a taste of what is to come.

With unions backing the crippling general strike, the protests were seen as a key test of Prime Minister George Papandreou’s determination to carry out the reforms. Germany, which will be picking up the lion’s share of the emergency aid, has been quick to warn that if Athens strays, the money will dry up.

Resolution, say some, will come only with a root-and-branch clean-up of Greece’s corrupt political system. Said shopkeeper Makis Papadopoulos: “This crisis has taught us that we can’t go on acting the way we did, living off loans, treating the state as an endless treasury to be raided, never thinking about our future.”

Mood grim as EU meets
The future of the European Union is on the line, the German chancellor warned on Wednesday, as member states faced up to the financial emergency in Greece.

The spiralling tension over Greece’s ballooning debts and the EU’s first bailout of a country in the single currency has exposed fundamental questions about the EU and Ger­many’s pivotal role as the union’s biggest power.

In Berlin, where Chancellor Angela Merkel faces a groundswell of hostility to sending the Greeks a €22-billion lifeline next week, leaders issued stark warnings about the prospects for the EU and insisted on a punitive new regime for the 16 euro countries if the monetary union is to survive.

The leaders of the eurozone’s 16 nations are to assemble for an emergency summit on the Greek crisis in Brussels on Friday evening, with the mood bleak and the stakes high.

“Europe is at a crossroads,” Merkel declared to the German Parliament in Berlin. “This is about no more and no less than the future of Europe and about Germany’s future in Europe.”

Her sombre tone was echoed by the opposition leader and former foreign minister, Frank-Walter Steinmeier, who said the Greek crisis presented the EU with its biggest challenge since the Common Market was created in the 1950s.

Should Greece renege on the terms of a €110-billion rescue package, agreed at the weekend, it will lose the funds, say European leaders. It would then face financial collapse, defaulting on €300-billion of sovereign debt. —