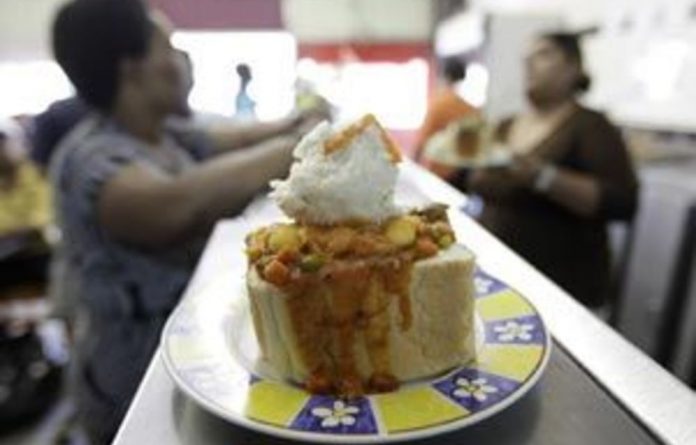 Anyone will tell you that the best place to get a bunny chow is the land of its birth: Durban.

Think of it as an edible lunchbox — which is probably how it started. The story goes that — pre-polysterene — curry take-aways weren’t too easy. But there’s nothing like a bit of subcontinental ingenuity in a country with the biggest Indian Diaspora. Curry wizards hollowed out a white loaf, piled in the good stuff, and topped it with the fluffy tail of excavated bread.

The bunny is also something of a political food. A take-away form of curry was necessary thanks to apartheid legislation, which banned black people from eating in Indian-owned restaurants.

While the messy and deeply-satisfying dish is loved throughout the country, the best ones are found in the humid seaside city of Durban — where most Indians were shipped in as sugar cane workers from 1860 onwards, and still reside.

Here are the most famous spots as recommended by locals, along with a “Mutton” price tracker.

Goundens
Eaton Road
Some swear by Goundens in Eaton Road, slap in the middle of an industrial area in Umbilo. The bunny is first and foremost a working class meal so don’t expect five-star dining in most of these establishments. Do, however, expect cheap, fresh food. It’s impossible to get hold of Goundens but last we heard a quarter beans (referring to the size of the loaf) will set you back R10. There’s also a coke and mutton combo for R35.
The other food for thought at Goundens is the soap opera details of the family who own the place. Think love, divorce and the spawning of three different places claiming to have the original recipe from the old, extremely popular Willowvale Hotel.
Alcohol served? Yes

Oriental Restaurant
Another bunny legend — in the buzzing Workshop Centre in Durban central, 99 Aliwal Street. The centre itself is rather fabulous, if a bit gritty, being the original 1960 railway workshop of the Durban station.
Oriental offers a slightly classier sit-down bunny experience in its massive restaurant. Locals say the place is always super-busy, churning out curry by the bucket-load, but the grumpy owner insisted that wasn’t always the case when we spoke to him. Besides the bunny staple — R35 for the mutton — you can get a number of other South African Indian dishes.
Alcohol served? No

The Thirsty Horse Pub and Café, Britannia
Situated at the Britannia hotel at 1299 Umgeni Road, it’s worth the trip just for the lovely building. Britannia is an official heritage site built in 1897 with colonial flourishes. More than a century later it doesn’t have the best surrounds on a busy road on the fringes of the city — but people swear by their bunnies. You can perch at the sports bar surrounded by slot machines and big screen TVs and get to know the locals.
Mutton Bunny: R26
Alcohol served: Yes

Little Gujarat
Strictly vegetarian, Little Gujurat is in the historic Indian district. They have two locations, at 43 and 107 Prince Edward Street. If any bunny joint has kept its authenticity, it’s this tiny place, where locals stream in and out or squish together at the long tables,wolfing down the house favourite: broadbeans and mixed veg. All their bunnies are either R8 or R16 and you can choose between 12 different curries. Don’t expect the best though. I might have gotten there on a bad day but I found the beans bunny undercooked and a bit tasteless.
Alcohol served: No

Govender’s House of Curries — Blue Lagoon Roadhouse
“Lugs” as it’s known, boasts of being the number one bunny spot. We’re not so sure, but it’s worth it for a viewing of some serious local Indian subculture. It’s open all night on weekends and wannabe Indian gangster types hang out with their souped-up cars. Their bunnies won’t blow you away but their chilli-cheese burger definitely will. You’ll find it on the famous Lagoon Drive along the banks of the Umgeni river. Their Mutton Bunny cost R28, plus a R1 charge to sit in.
Alcohol served: No

So happy hunting. And remember, whatever you do, don’t use cutlery.