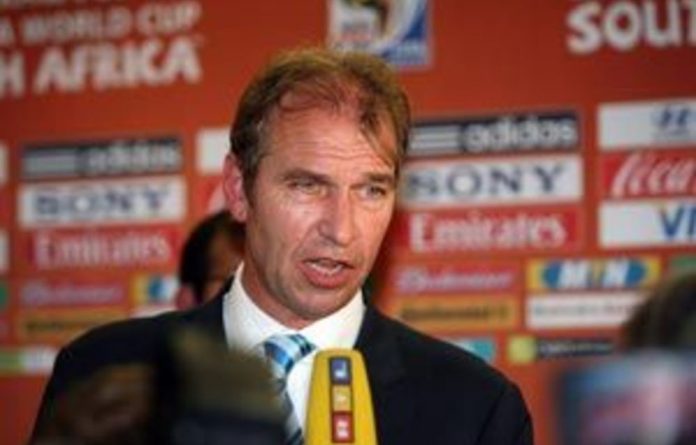 Australia coach Pim Verbeek has set a modest goal for the Socceroos at the Soccer World Cup, targeting a spot in the second round to match their 2006 campaign in Germany.

“My expectation is that we can go to the final 16,” Verbeek told Reuters in an interview on Tuesday.

“We all know we’ve got a tough group but we all know that Australian mentality is they love a challenge, they love to play tough games and that’s what I feel from my players.

“They know that it’s tough and they will be prepared. We will do everything possible to be in the final 16.”

Australia, 20th in Fifa’s latest world rankings, will play sixth-ranked Germany, world number 16 Serbia and Ghana (32) in Group D, one of the toughest at the June 11-July 11 tournament.

Drawn with Brazil, Croatia and Japan in 2006 at their first World Cup appearance in 32 years, the Socceroos advanced to the second round where they lost to eventual champions Italy after a controversial last-minute penalty.

Some pundits have tipped the Socceroos, galvanised by the experience binding the Europe-based veterans of the 2006 campaign, to progress as far as the quarterfinals.

With most of his first team well established, Verbeek unveiled few surprises in an expanded 31-man squad for the South Africa finals on Tuesday, ensuring speculation for the final 23 to be named on June 1 remains squarely on the fringes.

“Central defenders, of course you had a lot of them and you have to only pick four [or] five. That was difficult in that position,” he said.

The straight-talking Dutchman also felt compelled to play down concerns over a recurring groin injury that has seen Harry Kewell play only a few minutes for Turkish side Galatasaray this year and cast his World Cup preparations in doubt.

“There are rumours, there are opinions, but Harry will be ready,” Verbeek earlier told reporters.

“We still have five weeks to prepare for the first game against Germany, so don’t worry, Harry will be there.”

Verbeek will have a week-long camp ahead of a May 24 friendly against trans-Tasman rivals New Zealand to hone the squad.