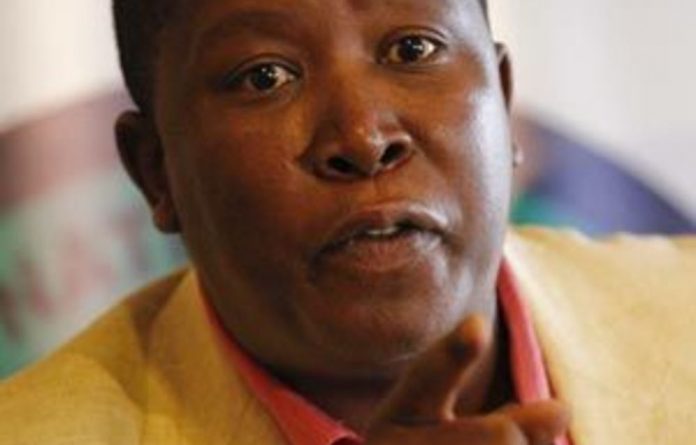 “It is not a light ruling,” said ANC spokesperson Brian Sokutu in a statement. “The ruling … demonstrates the ANC’s zero tolerance on conduct not in line with its leadership values.”

Sokutu said if Malema was again found guilty of contravening the same rule in the ANC constitution within the two next years, his membership would be suspended for a period to be determined by the disciplinary committee.

Malema pleaded guilty at a disciplinary hearing on Tuesday. The charge related to him publicly criticising President Jacob Zuma for rebuking Malema.

He was ordered to apologise to Zuma, pay a R10 000 fine to a youth development project and attend the ANC’s political school for 20 days.

“We have noted that not only has comrade Malema pleaded guilty to contravening … the constitution of the ANC by behaving in such a way as to provoke serious divisions or a breakdown of unity in the organisation, but that he has showed remorse,” said Sokutu.

“He [Malema] has submitted an apology to the ANC president and the Republic [of South Africa] … which has now been made public,” said Sokutu.

The ruling party approved of the “remedial action” taken against Malema, he added.

“The ANC is particularly pleased with the corrective nature of the ruling, which includes remedial action like attending the ANC political school for at least 20 days within the next year, from the date of this ruling; and attending programmes on effective leadership communication and anger management.”

‘Bloody agent’
Malema was hauled before an ANC disciplinary hearing last week for publicly supporting Zimbabwean President Robert Mugabe’s Zanu-PF party, his calling a BBC journalist a “bastard” and a “bloody agent”, and his singing “shoot the boer” after it was banned by the high court.

These charges were withdrawn during Tuesday’s proceedings after a plea bargain was reached with Malema’s representative, Mathews Phosa.

Malema was, however, found guilty on a charge relating to his public attack on Zuma.

He attacked Zuma for rebuking him in public and compared him to his predecessor, Thabo Mbeki, while addressing the media on April 11.

“You [Malema] are guilty of contravening Rule 25.5. (i) of the Constitution of the African National Congress by behaving in such a way as to provoke serious divisions or a break-down of unity in the organisation,” the charge read.

Public apology
Malema’s public apology states: “I, Julius Malema, apologise to the president of the ANC and the Republic, comrade Jacob Zuma and to the membership of the African National Congress and the public in general for the statements and utterances that I made on April 11 2010 at the ANC Youth League Limpopo provincial congress implying that the ANC Youth League has taken a position against the president of the ANC.

“I make this apology unconditionally as I accept that as a leader of the ANC and of the ANC Youth League my conduct and public utterances should at all times reflect respect and restraint. I accept one of the key principles of Congress leadership as outlined in Through the Eye of the Needle, a policy document adopted by the 51st and 52nd National Conferences of the ANC, that an abiding quality of leadership is to learn from mistakes, to appreciate weaknesses and to correct them.

Attack on media freedom
The South African National Editors’ Forum (Sanef) has released a statement, in which it says it deplores the decision by the ANC’s National Disciplinary Committee to take no action against Malema for his abuse of BBC journalist Jonah Fisher at a press conference last month.

Malema called Fisher a ‘bastard” and a ‘bloody agent’ in expelling him from the conference. The ANC disciplinary committee withdrew a charge that was laid before it over these insulting and defamatory references to Fisher after it had accepted a plea bargain on behalf of Malema and because there was an alleged technical error in the manner in which the charge was laid.

Sanef believes that Malema’s attack on Fisher was an attack on media freedom and amounts to censorship and unacceptable conduct towards the media. — Sapa