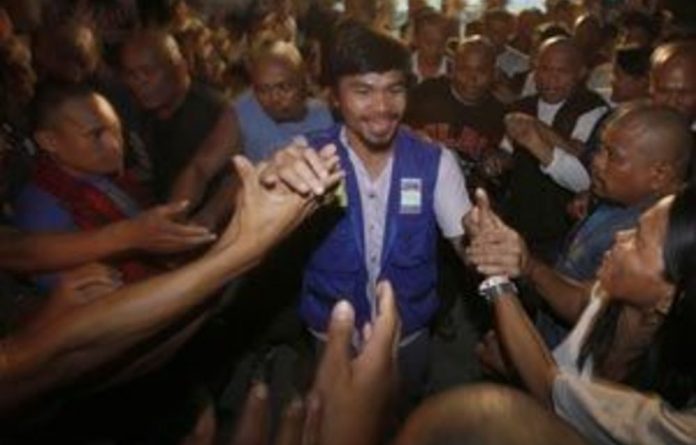 World boxing champion Manny Pacquiao announced on Wednesday that he wanted to face Floyd Mayweather for his last professional fight after launching a political career in the Philippines.

A Pacquiao-Mayweather clash, which United States promoter Bob Arum said could take place on November 13 in Texas or Las Vegas, would likely generate one of the biggest purses and television audiences in boxing history.

“Many fans really want me to fight Floyd Mayweather so I asked my Mama if we can give them one more fight, she said okay,” Pacquiao said in an interview with broadcaster ABS-CBN.

Pacquiao, 31, is one of the world’s highest-paid athletes and fans are clamouring for a clash with former champion Mayweather, 33, to determine who is the greatest welterweight of their generation.

Negotiations for a Pacquiao-Mayweather fight fell through earlier this year when the American insisted on Olympic-style random drug testing, which the Filipino rejected as too intrusive before a bout.

Pacquiao secured a landslide win in national elections on Monday for a seat representing the southern province of Sarangani.

US promoter Bob Arum, who flew to Sarangani to watch Pacquiao campaign for Monday’s election, told the Manila Standard newspaper he had blocked out November 13 at the Dallas Cowboys Stadium and the MGM Grand in Las Vegas.

“The cable television companies and satellite providers have put the date aside for us, so the table is set,” said the flamboyant Top Rank boss.

He was among dozens of celebrities who ran for positions, ranging from president to town councilor, in national elections across the boxing-mad Philippines, one of Asia’s most boisterous democracies. — AFP

ALL OUR CORONAVIRUS COVERAGE Boxing and women’s football qualifying for the 2020 Olympics will be moved from the...
Read more
National

Florence Sosiba, speaks to the Mail & Guardian about how important domestic workers are and exclusion in the COIDA
Read more
Advertising