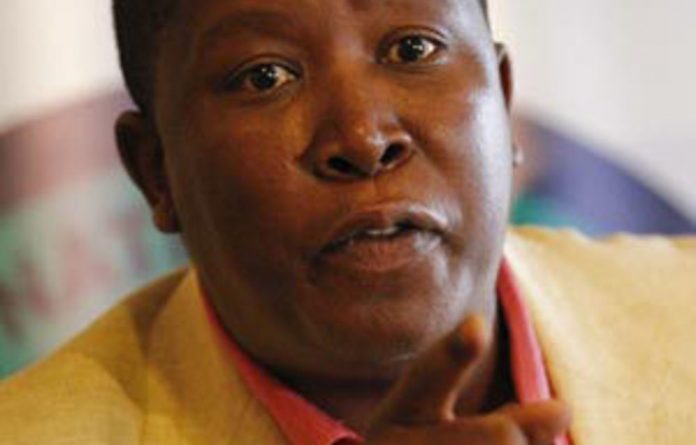 The African National Congress’s decision to drop three of the four disciplinary charges against ANC Youth League leader, Julius Malema, has been sharply criticised by opposition parties and other bodies.

While most were pleased that Malema had been found guilty over a public attack on President Jacob Zuma, all decried the dropping of three other charges against him.

The outcome was “deplorable” and “sacrificed” democratic principles, said the critics.

“The ANC has made it clear that democratic principles such as freedom of expression, the rule of law and democracy count for nothing when compared to deference and obsequiousness, on which the ruling party clearly places a far greater emphasis,” the Democratic Alliance’s Khume Ramulifho said in a statement.

Malema was hauled before an ANC disciplinary hearing last week for publicly supporting Zimbabwean President Robert Mugabe’s Zanu-PF party, calling a BBC journalist a “bastard” and a “bloody agent”, and singing “shoot the boer” after it was banned by a high court.

These charges were withdrawn during Tuesday’s proceedings after a plea bargain was reached with Malema’s representative, Mathews Phosa.

Malema was however found guilty on the charge relating to his public attack on Zuma. He had pleaded guilty to all four charges.

He attacked Zuma for rebuking him in public and compared him to his predecessor, Thabo Mbeki while addressing the media on April 11.

Ramulifho said this “superficial remark went straight to the president’s ego” and “sacrificed democratic principle on the alter of egoism”.

AfriForum leader Ernst Roets said the withdrawal of the charge regarding singing dubula ibhunu (shoot the boer) was cause for concern.

“It’s an indication of the ANC’s nonchalant attitude towards the independence of the judiciary and their support for the song.”

The Young Independent Democrats cried foul over the youth league leader’s “real crimes” going unpunished. It called the ANC’s disciplinary process a dishonest attempt to portray itself as an ethical party.

“The ANC has shown that it does not care about Malema’s real crimes and that insulting Jacob Zuma is far worse than stealing millions of rands from poor South Africans through tax evasion,” its leader Xanthea Limberg said.

Meanwhile the Pan Africanist Congress (PAC) said a further charge of “falsifying” the history of the 1960 Sharpeville/Langa day massacre should have been added.

“The events were led by the PAC and the youth leader claims that they were hijacked by our movement,” the party said.

The IFP-aligned South African Democratic Student Movement said it was wrong to think that sanity would prevail in the ANC.

“The sentence is very disappointing and as students we are concerned because time and time again Malema uses university platforms to relieve himself of his verbal diarrhoea,” spokesperson Mkhuleko Hlengwa said.

Malema has been ordered to attend anger-management classes, make a public apology to the ANC president, the ANC and the public in general and pay a fine of R10 000 to a youth development project.

He was also ordered to attend the party’s political school for 20 days.

Civil rights organisation AfriForum said the outcome of Malema’s disciplinary hearing confirmed the need for an equality court case against him. –Sapa