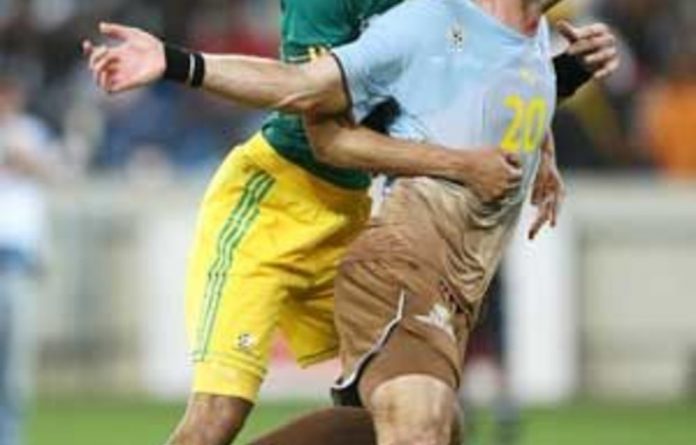 There are no other changes to the original 29-strong list released by Brazilian coach Carlos Alberto Parreira 13 days ago for the June 11-July 11 tournament.

Fransman, a tall, 26-year-old native of Cape Town who plays for Maccabi Netanya, owes his call-up to an injury which ruled out Morgan Gould from champions SuperSport United.

Gould has been sidelined since February and Parreira said the South African Premiership star would not be ready for a challenging Group A schedule against Mexico, Uruguay and France.

Coach of the 1994 Brazil World Cup-winning team, Parreira has five central defenders and one is likely to drop out by June 1 when the 32 qualifiers must cut their squads to 23 players.

Captain Aaron Mokoena, Siyabonga Sangweni and Bongani Khumalo are sure to make it, leaving 2009 Confederations Cup cult figure Matthew Booth and Fransman fighting for the other place.

Bafana Bafana play Mexico at the 90 000-seat Soccer City stadium on the outskirts of Soweto in the opening match of the first World Cup staged in Africa.

They face Thailand Sunday in Nelspruit, Bulgaria (May 24), Colombia (May 27) and Denmark (June 5) in other friendlies while Parreira has not abandoned hope of a warm-up against Argentina.

No World Cup host has failed to reach the second round, but South Africa are outsiders against former champions France and Uruguay and Mexico in arguably the toughest of eight mini-leagues. — AFP