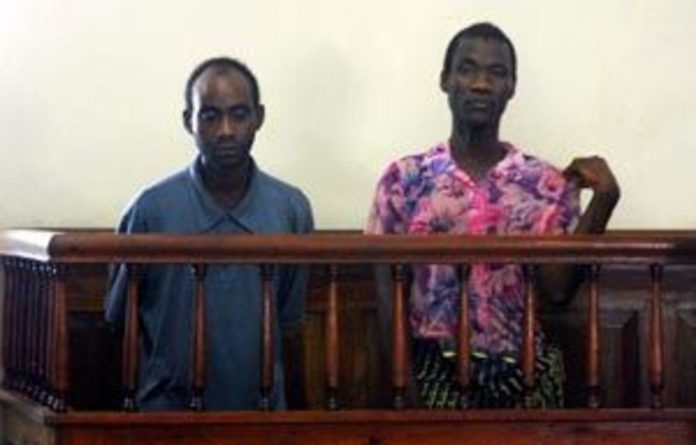 A man whose same-sex “marriage” has become a symbol of the struggle for gay rights in Africa has vowed to become a martyr rather than give in to homophobia, campaigners said. Tiwonge Chimbalanga and his partner Steven Monjeza are facing a possible 14 years in prison with hard labour after becoming the first gay couple in Malawi to declare their commitment in a public ceremony .

Peter Tatchell, the veteran British gay rights campaigner, has maintained contact with the pair at the maximum security Chichiri prison in Blantyre as they prepare to stand trial next week.

Tatchell told the Guardian he received a defiant message from Chimbalanga that said: “I love Steven so much. If people or the world cannot give me the chance and freedom to continue living with him as my lover, then I am better off to die here in prison. Freedom without him is useless and meaningless.”

Tatchell, of the rights group Outrage!, also quoted Monjeza — who is described as thin and weak with jaundiced eyes — as saying: “We have come a long way and even if our family relatives are not happy, I will never stop loving Tiwonge.”

Chimbalanga, 20, and Monjeza, 26, made history when they committed to marriage at a symbolic ceremony last December — the first same-sex couple to do so in the southern African state, where homosexual acts are illegal.

Two days later, the couple were arrested at their home. Facing taunts and jeers, Chimbalanga, wearing a woman’s blouse, and Monjeza appeared in court to answer three charges of unnatural practices between males and gross indecency. They were denied bail, supposedly for their own safety, and have been forced to endure dire conditions in jail.

‘They have given this township a bad name’
The couple are due back in court on Tuesday, when magistrate Nyakwawa Usiwa Usiwa will deliver his verdict. Angry residents and relatives from Machinjiri township, on the outskirts of Blantyre, say they will not allow them to return home if they are set free.

“They have given this township a bad name,” said Maikolo Phiri, a local vendor.

Zione Monjeza, an aunt of Monjeza, said: “We as a family have been terribly embarrassed to be associated with this gay thing. It’s a curse and a big shame. We will chase them away if they are freed.”

Nchiteni Monjeza, Monjeza’s uncle, said: “I won’t drop a tear if they are jailed — they deserve it.”

But for others, the couple are social revolutionaries in this impoverished, landlocked nation that usually makes headlines only when someone like Madonna flies in.

Homosexuality has an Orwellian invisibility in Malawi, where gay rights and transgender activism was not merely suppressed but virtually non-existent. Yet Chimbalanga told the New York Times in February: “I have male genitals, but inside I am a complete woman. Maybe I cannot give birth to a child, but I menstruate every month — or most months — and I can do any household chores a woman can do.”

Some have now been emboldened to speak out. George Thindwa, head of the Association for Secular Humanism, said: “The gay movement is gaining ground. The country should simply accept gays.”

A retired economist, Thindwa, who has not openly declared whether he is gay, added: “We are giving them moral support by bringing them food, money and clothes to prison.” Thindwa’s group has joined the Centre for the Development of the People, which is financing the couple’s defence. The case could be seen as a test case for the struggle between gay rights movements and resistant conservative sentiment across the continent.

Gay sex is still illegal in 37 countries in Africa. A recent poll by the Pew Research Centre found that 98% of people in Cameroon, Kenya and Zambia disapprove of homosexuality. But encouraged by legal advances in South Africa, a new wave of activist movements are making a stand and pushing the boundaries in Kenya, Ghana, Malawi, Zimbabwe and other countries in ways unthinkable a generation ago. Gay and lesbian lifestyles are also much more visible.

Religious backlash
This assertiveness is apparently being met by a ferocious backlash from religious fundamentalists and politicians determined to preserve the status quo. It has been described as a proxy war between United States liberals and Christian evangelicals, both of which pour in funding and support to further their cause.

Uganda has become a central battlefield after legislation was proposed last year advocating punishments for gay sex that range from life imprisonment to the death penalty. The country has come under intense pressure from activists both inside Uganda and overseas.

It emerged last week that a special committee organised by president Yoweri Museveni has recommended that the bill be withdrawn. That would be a important victory for organisations such as Freedom and Roam Uganda (Farug) and Sexual Minorities Uganda (Smug).

Val Kalende of Farug, which was set up in 2003, said: “I believe that now is the season and time for lesbian, gay, bisexual and transgender rights in the continent. The LGBT rights movement has grown and it has come to a point where people can no longer be silent about injustices.”

Asked if the gay rights lobby is resulting in a surge of homophobia, Kalende added: “Yes. Long before we built a movement here, no one bothered about us. We got away with so many things. When we decided to come out and claim our space, society came harshly against us.

“This implies that we are stepping on people’s toes. People hate to see us free and that’s why oppression of LGBT people is on the rise. One of the indicators of a progressive social movement is when its enemies start organising against it.” — Guardian News and Media 2010