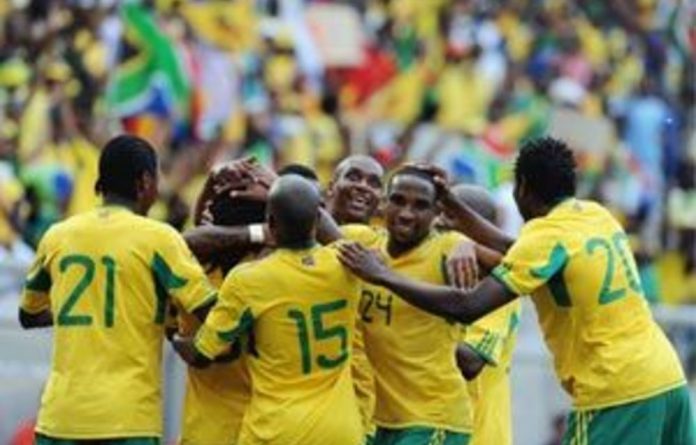 Bafana Bafana head coach Carlos Alberto Parreira, was a happy man on Sunday night after his side hammered and outclassed a weak Thailand outfit 4-0 at the new Mbombela Stadium to kick start the national squad’s World Cup preparations at home, but stressed there was plenty of room for improvement.

Despite playing a weak Thailand side who were nothing more than cannon fodder for their hosts, Parreira stressed the positives saying: “I had two goals for this match — the first to get a result and the second was a good performance from the players and we achieved both, so I am satisfied.”

The result equals Bafana´s best win at home and was a fitting way to celebrate the official opening of the new stadium in Nelspruit which was built to for the Soccer World Cup.

Thailand, ranked 105th in the world — 15 places below the Bafana — are, however, not in the same class as the opponents Bafana will face at the World Cup.

Bafana open the global showpiece against Mexico at a sold out Soccer City on June 11 and then play former world champions Uruguay at Loftus, and end their first round against 1998 world champions France in Bloemfontein.

Said Parreira: “The atmosphere and quality of opponents at the World Cup is different to this, so we need to be ready and Thailand have assisted. This game started the final phase of preparation for the World Cup.”

‘We are improving’
The Bafana coach said the next four friendly matches at home would be crucial to his plans. “We are improving, but our next opponents, Bulgaria, [at Soccer City on May 24, Colombia [at Cape Town’s Green Point Stadium on May 27], Denmark [at Soccer City on June 5] and another side we will play on May 31, will give us a proper test to show we are prepared and ready for what is going to be a tough World Cup group we find ourselves in.”

Parreira said the fourth friendly match, originally scheduled against Argentina, is a non-starter but said a new opponent would be found. “The game against Argentina does not look like getting off the ground, but I have another team lined up which we will announce soon.”

Reacting to criticism about Thailand´s inept display, the Bafana coach said even the big guns such as Brazil, who he led to World Cup glory in 1994, are playing some of the world’s minnows.

“Every game we get is to help us get ready. Brazil will also be playing so called smaller teams in preparing for the World Cup. Thailand helped us by showing me how far we have progressed at this stage.”

All Bafana’s European based players will be available for next Monday night’s showdown against Bulgaria, including Everton Player of the Season Steven Pienaar, Bafana skipper Aaron Mokoena — who played a storming match despite his side, Portsmouth, losing 1-0 to Chelsea in Saturday’s FA Cup — Fulham’s Kagisho Dikgacoi and Russian-based Macbeth Sibaya.

Parreira pointed out other positives, such as the players learning to keep possession. The two goals from striker Katlego Mphela, a stunning free kick from Siphiwe Tshabalala and a cameo performance from FC Twente striker Bernard Parker who scored the fourth goal in the 90th minute after coming on as a second-half substitute.

Said Mphela whose last goal for his country was against Namibia in March in a 1-1 draw: “I was happy with my performance and the goals have boosted my confidence.”

Thailand outplayed
Thailand coach Bryan Robson, admitted his side were outplayed but said due to league commitments at home he was forced to bring a weakened side and refused to blame the civil strife in Bangkok for his team’s dismal showing against Bafana.

Said the former Manchester and England international star: “I knew it was going to be tough taking this game at the last minute, but having said that, South Africa played really well at times, especially in the first half and scored some good goals.

“The unrest in Bangkok had nothing to do with the players’ performance. It was down to inexperience and not having some of my top players — including my experienced strikers — available.”

That point was borne out by the fact Thailand had one shot at goal on target during the entire 90 minutes. — Sapa