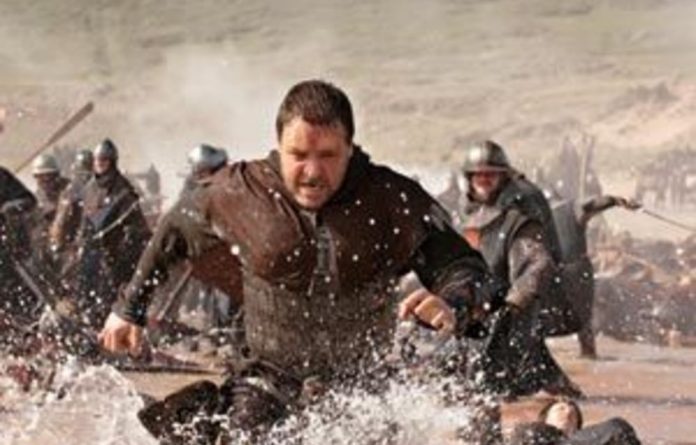 No sooner had Ridley Scott announced that he’d be making a version of the Robin Hood story than it was dubbed “Gladiator in [green] tights”. There was the presumption — and the hope — that Scott, with Russell Crowe again in the lead role, would duplicate the enormous success of that swords ‘n sandals action-adventure when he took on the archer of Sherwood Forest.

Scott being Scott, of course, and having learned from his repeated re-cutting and re-releasing of Blade Runner, blamed the length of Kingdom of Heaven for its relative failure. He had had to cut it to a mere two and a half hours for general release. At its full length of three hours and 10 minutes, as released on the “director’s cut” DVD, it is supposed to be a much better film — and so it may be. But it’s unlikely that the 192-minute version (which I haven’t seen) reproduces the punchy drive of Gladiator. At any rate, we can anticipate a “directors cut” of Robin Hood, say three and a half hours long, in about a year’s time.

Maybe it’s unfair to expect another Gladiator of Scott, but then the posters for Robin Hood do show a grimy and bloody-faced Crowe squinting along the shaft of an arrow he is surely about to send whizzing through the air and thumping with a satisfying thwack into someone’s chest. Hence the expectation that Crowe’s Robin is going to do a lot of arrow-shooting. The poster doesn’t show him gazing longingly but with some bewilderment at Maid Marian (Cate Blanchett), engaging in puzzled but polite negotiations with Sir Walter Loxley (Max von Sydow), or even planting the fields of Nottingham by night.

All this additional narrative stuff is presumably there to make Robin Hood richer, deeper — and more epic. It doesn’t want to be just a good-looking action movie like Gladiator. It wants a whole lot of history and a whole lot of plot, or a few plots moving in parallel, with political machinations as well as a mystery around Robin’s heredity to be solved. The heredity issue is quite unnecessary, and it’s resolved by a series of coincidences.

But the heredity stuff is there because this Robin Hood, like the recent Wolverine, is an “origins” tale — how Robin Longstride, as he’s called here, came to be the Robin Hood of legend. More than a little pretentiously, the film also wants to make some social and political comment, giving key characters stirring speeches about how to democratise Merrie England.

Thus we have an early rehearsal of the war with the barons and the signing of the Magna Carta, which historically happened about 15 years after the year in which Robin Hood is statedly set. We also have anachronistic references to “the French” (when the Plantagenet royal family was in fact more French than English) as well as rhetoric about “a united nation” when the very idea of nationhood as we understand it today was more than half a millennium in the future.

But let’s not get caught up in enumerating historical inaccuracies (a weakness of mine); the point is that Scott has claimed his Robin Hood is the most historically accurate Robin Hood movie so far, but it most certainly is not — or at least not in terms of historically ascertainable events. About the only firm historical fact in it is that King Richard died in 1199.

Maybe its look, its costumes and mise en scène are more historically accurate than some other Robin Hood films, which seemed to transport the late 12th century to some time closer to the 15th or 16th, what with all those jerkins, tights and rapiers. But Scott’s historical sense is that of an art director and costume designer rather than that of a storyteller who wants to get some real grit from real history. Let it be said, at least, that in Scott’s film there isn’t a pair of tights anywhere to be seen.

In other respects, it has no true inkling of the ways in which life in the 12th century might have been radically different from today’s. If Robin Hood was an archer, as legend has it, and lived in the time of King Richard, he would be very unlikely also to have the sword-fighting, horse-riding and other knightly skills displayed by this Robin. The division of labour in the medieval military was stricter than that, as was the feudal class structure. And then there’s the position of women: our Maid Marian here is exceptionally liberated for her time.

But I’m getting distracted by historical inaccuracies after all. The chief point to be made about all this mucking about with history is that the film probably wants to do too much, trying to look “authentic” while also jamming in a whole lot of royal scheming and manoeuvring. It can’t decide, in fact, whether it wants to be Gladiator in chainmail, a semi-sequel to The Lion in Winter, or Spartacus in 1199. It gets way too caught up in its own plotting and that of King John, his would-be usurper the king of France (not that France existed as a nation), and a traitorous knight who will be Robin’s chief adversary here. There’s some side business about wild boys in the forest, too, but although it’s an intriguing angle on the story it is barely developed.

This Robin Hood is not a contender for Gladiator‘s crown as best period action movie. Also, as the latest in a long line of Robin Hood movies, comparisons are inevitable. I don’t think anyone expected Scott’s Robin Hood to have the wit and grace of Errol Flynn’s Robin Hood movie, or the wry earthiness of Richard Lester’s marvellous Robin and Marian (to take just the two best Robin Hood movies to date), though Scott does steal an idea or two from Lester, such as beginning the film with the siege of Chalus-Chabrol. But Scott certainly hasn’t got the Lesterian sense of history as a bloody, black-comic mess — then again, which filmmaker today does?

What is quite unexpected is that Scott’s Robin Hood isn’t nearly as exciting as Robin Hood: Prince of Thieves. That Kevin Costner vehicle was frequently preposterous, and Costner has no personality beyond his own vanity, but at least it kept the action moving and the thrills coming. Crowe is far less irksome than Costner, and less irritating than he has been elsewhere, but he also lacks the direct physical force he displayed in Gladiator. He seems to spend too much time trying to be a progressive democrat avant la lettre or a sensitive “new man” in relation to Marian. And there’s not nearly enough in the way of thwacking arrows.

To celebrate the release of Ridley Scott’s Robin Hood, we are giving away a
pack of three DVDs to five M&G readers, courtesy of United International
Pictures. Email here with your name, address, telephone number and answer.

Question: Who stars in both Gladiator and Robin Hood?

The DVDs are Gladiator, Ridley Scott’s huge hit about a Roman general who is
betrayed and comes to Rome as a gladiator to seek revenge; American
Gangster, Scott’s movie about Frank Lucas, a heroin kingpin in Manhattan in
the 1970s, and Elizabeth, about the early years of the great queen.

Society’s fascination with robbing the rich to feed the poor, whether fabricated or in real life, reveals a profound longing for justice and redistribution in a capitalist world
Read more
Advertising
Continue to the category
Coronavirus