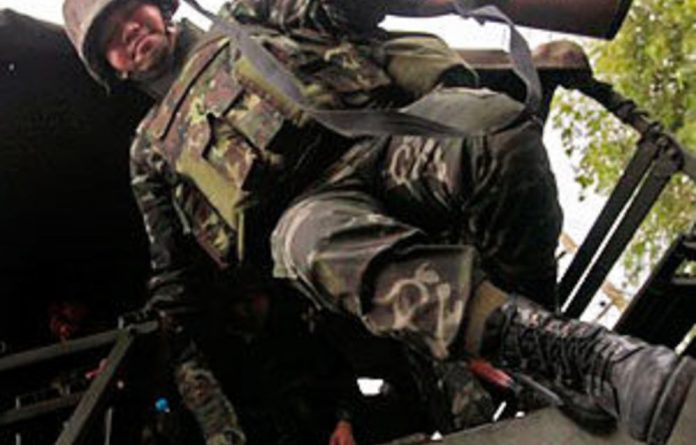 Thai protesters ignored calls by the government to leave their central Bangkok camp on Monday as troops tightened a security cordon around the area, raising fears of fresh bloodshed after 37 people died in five days of fighting.

The government has demanded an end to protests and rioting before any talks with opponents seeking immediate elections.

It had given an estimated 5 000 people hunkered down in the sprawling protest area until 3pm local time to leave or face criminal charges.

That deadline went by without incident at the main encampment, but fighting continued on the periphery east and north of the area, which troops were struggling to seal off.

“We will keep sending warnings to protesters and will slowly step up pressure if they don’t go,” said Thawil Pliensee, secretary general of the National Security Council, adding there was no immediate plan to clear the main camp by force.

On Sunday, “Red Shirt” leaders proposed a ceasefire and talks moderated by the United Nations, which the government dismissed out of hand. On Monday the protesters said they would accept talks as long as a neutral arbiter took part and troops withdrew.

“The government is ready to go forward with negotiations when they end rioting,” replied government spokesperson Panitan Wattanayagorn, adding that troops had reinforced their positions on roads around the area, packed with high-end shopping malls, ritzy hotels and luxury apartments.

A government source said talks were taking place behind the scenes but raised doubt any of the Red Shirt leaders had full control of the protesters, especially the more militant elements.

Around the city, people were hoarding food, while hotels were pleading for guests to leave. School term has been postponed and Monday and Tuesday were declared public holidays, although financial markets and banks remained open.

As fighting subsided in some areas, residents and tourists in the commercial district were seen leaving while they could, with luggage and children in tow. Chulalongkorn Hospital, adjacent to the encampment, had evacuated all of its patients.

Security cordon set up
Fighting near the encampment was intense overnight. A rocket hit the 14th floor of the Dusit Thani Hotel, a Reuters photographer said, triggering gunfire in the pitch darkness, since power had been cut to the area.

Guests at the Dusit Thani were evacuated on Monday morning after spending much of the night cowering in the basement.

Fighting had continued in at least three areas of the city of 15-million people at the weekend as the army struggled to impose a security cordon around the encampment occupying three square kilometres of the commercial district.

Troops readied buses for protesters who wanted to leave the area but a witness saw none taking up the offer on Monday.

Military helicopters dropped leaflets on the camp, barricaded with walls made of tyres, bamboo poles and razor wire, calling on the protesters to leave immediately.

The death on Monday of a renegade major general who was the Red Shirts’ military adviser, and an embarrassment to the military, threatened to further stoke tensions..

Major General Khattiya Sawasdipol, better known as Seh Daeng (Commander Red), had been shot in the head by a sniper on Thursday, a shooting that fuelled the latest violence in a five-year crisis pitting the rural and urban poor against the “establishment elite” that traditionally runs Thailand.

At least 37 people have been killed and 266 injured since then, according to Erawan Emergency Medical Centre.

Protest leader Jatuporn Prompan told supporters in the encampment, including women and children: “The king’s glorious mercy is the country’s only hope now. It’s the only way out.”

King Bhumibol Adulyadej (82) has stepped in to end past deadly crises during his 63 years on the throne but has been in hospital for seven months and has not publicly commented on this latest turbulence.

The Red Shirts, loyal to former premier Thaksin Shinawatra who was ousted in a 2006 coup, say Abhisit’s army-backed government, which came to power 18 months ago in a controversial parliamentary vote, is illegitimate and want new elections.

At least 66 people have been killed and more than 1 600 wounded since the red shirts began their protest in mid-March.

‘Terrible abyss’
Meanwhile, Thaksin on Monday called on the government and his Red Shirt supporters to step back from a “terrible abyss” and start talks to end civil violence.

“I stand with my countrymen in this terrible hour in our history,” Thaksin said in a statement.

“The pictures that I have seen go beyond any nightmares that could have been envisaged. I have no choice but to state resolutely the need for all sides to step back from this terrible abyss and seek to begin a new, genuine and sincere dialogue between the parties,” he said.

“The present action of the government dishonours our history and will forever weaken our institutions and democracy.” — Reuters, AFP