‘If they don’t give us what we want, we will not work’ 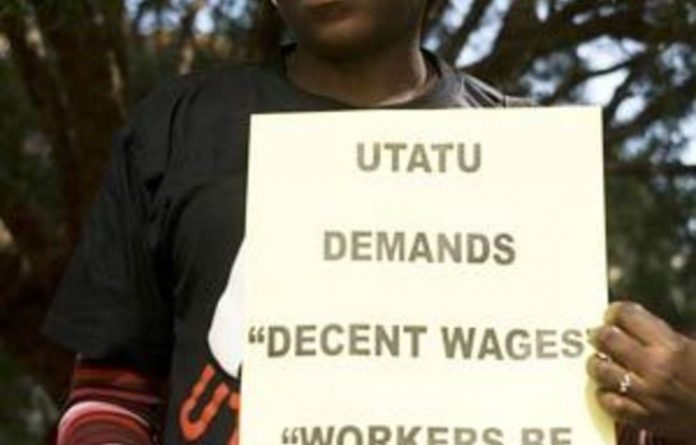 About 300 anxious Metrorail and Shosholoza Meyl workers gathered outside the Johannesburg offices of the Passenger Rail Agency of South Africa (Prasa) on Tuesday, waiting to hear if they would receive the 16% wage increase they are demanding.

“We are just waiting for the response from the managers and labour to tell us whether they have agreed on the amount that we need, or what is the way forward,” said Ruth Mbambula (41), who works in HR at Metrorail.

About 300 Metrorail and Shosholoza Meyl workers gathered outside the Johannesburg offices of the Passenger Rail Agency of SA on Tuesday 18 May 2010, waiting to hear if they would receive the 16% wage increase they had demanded. The Mail & Guardian interviewed some of these workers. Read the article

Mbambula said she was not happy with her salary, and also had other concerns with the company. But “for now we are just dealing with the salary issue”, she told the Mail & Guardian. “If they don’t give us what we want, we will not go to work. We can take two weeks or three weeks off, we don’t care.”

“We want nothing less,” Gloria Mangane (30), who works as an artisan for Metrorail, told the M&G.

Carrying placards reading, “Utatu demands decent wages, workers be respected,” the protesters said they were prepared to have their salaries reduced as a result of the strike action.

The rail agency initially offered workers an 8% across-the-board wage increase, but “there was some movement from them … they have changed their 8% conditions, but they will only put it in writing tomorrow [Tuesday],” Satawu deputy president Robert Mashego told the media on Monday.

‘Sixteen percent is a beginning’
Felix Ndlovu (48) has been working as a carpenter at Shosholoza Meyl for 26 years. He enjoys what he does, but feels unappreciated because of his R5 000 monthly salary.

“It’s very difficult for me, that’s why I am going to cash loans to satisfy my children.”

“Sixteen percent is a beginning, but next year I would like more than that,” he said.

“Like now we want to go see the soccer, but there is no chance of that.”

While the striking workers waited to hear a response to their demands, they sang protest songs and blew loudly on their vuvuzelas.

“We are singing songs of the struggle; we are still struggling even with the government of the people that we’ve chosen, but we are struggling,” said a Metrorail worker who wished to remain anonymous