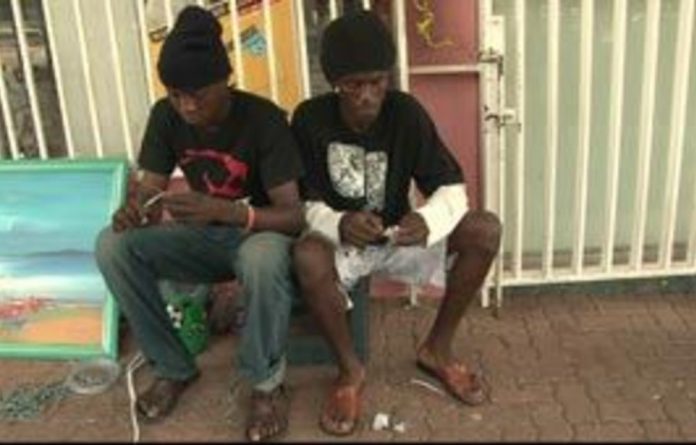 Silas (23) and Samuel (27) Muzumbi are brothers from Zimbabwe. Sitting on a beer crate and listening to reggae music, you can find the street traders selling their beaded wire art everyday on corner 7th and 2nd streets in Melville.

The brothers who’ve been in South Africa for almost two years have been selling their hand made artwork at this corner for almost six months.

As part of M&G‘s pre-World Cup coverage, we look at how ordinary people like Silas and Samuel Muzumbi are preparing for the soccer extravaganza.

“The economy in our country made it very difficult for us to sell our art so we decided to come to South Africa to make a decent living,” Samuel told the Mail & Guardian.

Surrounded by wire flamingos, sheep and paintings, the brothers are looking forward to the 2010 Soccer World Cup.

In the lead up to the Soccer World Cup they have even introduced new designs like the Makarapa [a South Africa soccer hard hat accessory] to their collection of pieces.

The brothers would like to watch soccer games, but haven’t bought world cup tickets yet.

Locals are the street traders biggest supporters but the Muzumbi’s are hoping to increase their customer base come the soccer tournament.

The brothers are working round-the-clock producing more stock, despite attempts by the Johannesburg Metro Police to get them off the streets.

Mail & Guardian: How has the response from people been, are they buying your artwork?

Silas Muzumbi: People are buying but not much, but little you know. People come here [Melville] to eat, but we convince them to buy.
M&G: Who taught you how to do this?
SM: In our country, we just learnt on the streets. We saw old people doing it and we just followed.
M&G: How long does it take to make your wire art?
SM: The little sheep key rings take an hour to make. The life-size sheep take a week and a half, because we have to make a big frame first then we put the beads, almost 20 packets of beads, so it takes a lot of time.
M&G: How much do you charge for your artwork?
strong>SM: The small sheep key rings we sell for R30 each, life-size, R1 500 and the paintings we normally sell them for R1 500.
M&G: So are you going to be making more things come the Soccer World Cup?
SM: We plan on making a lot of things. Now we have lots of things but we can’t put them here because of the Johannesburg Metro cops.
M&G: What have they been doing?
SM: They come and take our stuff, each and every time they put us down. We had a lot of stuff last week but now we have a little because they took it, now we have to start making it again.
M&G: Why are they trying to get you off the streets?
SM: They say there is no license to sell in the street, but then we went to the metro department in town for the license and then they said there is no license to sell art on the street.
M&G: So aren’t you scared that they are going to take your stuff again, now that you are making new stock?
SM: Yes we are scared, but there is nothing that we can do. There is no market here in Melville, but if they can help us and open a market here then we will be fine.
M&G: When the metro police drive past, what’s the strategy what do you do?
SM: I try to run with some other stuff. I pick it up and run, especially big things, paintings, soccer stuff, I try take it and run with it.
M&G: So are you still going to be at this corner come the Soccer World Cup, or are you going to move somewhere else?
SM:We don’t have any place we can find now to sell our stuff around the [soccer] grounds because I heared people say you can’t sell around the grounds.
M&G: Have the metro cops been worse now in the lead up to the World Cup?
Samuel Muzumbi: The metro cops are coming worse since the world cup is around the corner. They have let us down. We are trying to make art because you know art is an African thing but they come and take our stock all the time.
M&G: Which team are you supporting?
Samuel Muzumbi: Right now I am supporting South Africa
Silas Muzumbi: I am supporting South Africa and Ghana.