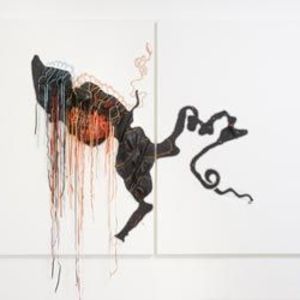 Despite sculptor Nicholas Hlobo’s many accolades — he won a Standard Bank Young Artist Award in 2008 and has exhibited at the Level 2 gallery at London’s Tate Modern — he enjoys a relatively low profile in his home country, South Africa.

One assumes the hope of the gallerists at Brodie/Stevenson is that Paintings, his exhibition of new works on canvas, will change this. For an artist whose works are prohibitively expensive to all but the wealthiest collectors and who does not attract hordes of fans to his openings, an exhibition like this will be a route into the consciousness of South African art audiences, who are persistently fixated on paintings.

David Brodie and Michael Stevenson, the proprietors of Brodie/Stevenson, have in the past encouraged non-painting artists to produce drawings and paintings, and the results are not always successful. Hlobo, by contrast, has made a feast of this project. He exploits the traditional constraints of painting and arrives at a series of magical abstract landscapes sculpted from canvas, line and colour.

The works in Paintings are similar to parts of Hlobo’s well-known visual diaries in which he stitches satin ribbon and black rubber into large sheets of white fabric. For this exhibition his ground is primed canvas, stretched over an ordinary frame.

But instead of working into and on his canvases as one might do if one were really painting, Hlobo slices into and buckles them, creating graphic fields by grafting in materials of different colours and textures. The canvas becomes a sculptural material with a bright array of thin satin ribbons, billows of black tyre inner tubes perforated to look like lace and patches of knitted fine wool. These materials are manipulated to form protrusions and caverns, which resemble a mountainous landscape viewed from the air.
The allusion to landscape is reinforced by the long paths of stitched ribbon that wind across the canvases as though they are undulating streams or the footpaths of an aimless wanderer.

In a diptych titled Phalela Mgama, Wanyus’ Msila a great black rubber mass is anchored to the canvas by trails of turquoise and orange ribbon. These threads meet up with a host of others and eventually cascade together off the edge of the black mound in a shower of jewel colours. The shadows these cast on the canvas are real-world foils of the illusory trompe-l’oeil shadows painters conventionally resort to by virtue of the two-dimensional medium. Hlobo’s sculpted topographies extend painting’s pictorial space into three dimensions. In a strongly graphic work, Isisele, the trailing paths of pink and blue ribbon lead at one point to a tiny cave whose walls are built from coiled ribbons. From a distance, this depression locks into a complex picture that seems to exist on a flat plane.

Hlobo’s approach is an obvious rebuttal of the very worn-out idea, propounded in the 1950s by the American art critic Clement Greenberg, that paintings are inherently flat and ought to be concerned with their own flatness. He might have chosen a less predictable route to navigate the laden history of painting. But for this blatancy, the works on Paintings are as tender, majestic and measured as can be expected from this ­consummate young artist.

Thenjiwe Nkosi’s paintings, done in a muted palette, are not of athletes’ gymnastics but of the moments before and after their performance
Read more
Friday

Trump's likeness has been ruthlessly disfigured by 'high' and 'low' artists alike, who have made no secret of their dislike of the president
Read more
Friday