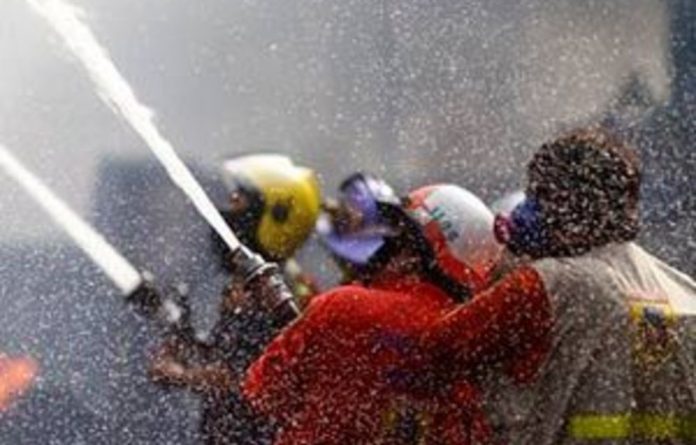 Huge fires swept through major buildings in central Bangkok on Wednesday as looting and arson gripped the Thai capital after a deadly army crackdown on anti-government protesters.

Plumes of black smoke billowed across the skyline in the aftermath of the military operation against the protesters’ fortified camp, which left at least five people dead and led the leaders of the “Red Shirt” movement to surrender.

The authorities said enraged protesters — some wearing black and carrying automatic weapons — went on the rampage and set fire to at least 15 buildings.

Military officials told Agence France-Presse (AFP) a helicopter had been dispatched to try to rescue at least 100 people trapped in the offices of the Channel 3 TV station after it was attacked and set on fire.

Blazes were also reported at Central World, one of South-east Asia’s largest shopping centres, the Stock Exchange of Thailand, a branch of an electricity company and a bank.

The government imposed an 8pm to 6am local time curfew on Bangkok in a bid to quell the eruption of violence, but the authorities admitted that parts of the capital were still outside their control.

“Tonight [Wednesday] will be another night of suffering,” said government spokesperson Panitan Wattanayagorn.

“The government calls on everyone who is carrying out attacks to stop that action because their leaders have already surrendered and agreed to enter into national reconciliation,” he said.

The unrest began when armoured vehicles backed by armed troops firing live rounds smashed through barricades erected around the Red Shirts’ sprawling base.

A tearful protest leader later announced on stage that the Reds would end their occupation of the upscale shopping and hotel district in the heart of the capital, where they have been camped for six weeks.

At least four top Reds later went to the police headquarters nearby to give themselves up. The government said earlier some others had already fled.

An Italian photographer was among those shot dead during the clashes at one end of the rally base, which stretched for several kilometres and had been fortified with barricades made with tyres, bamboo stakes and razor wire.

An AFP photographer saw two protesters lying dead on the ground after being shot in the head when troops pushed into the encampment.

“I got shot from behind through the shoulder. It’s just a flesh wound,” a reporter with Dutch national TV, Michel Maas, told AFP at the hospital.

Another journalist, a Canadian, and four soldiers were also badly wounded by grenade attacks inside the camp, AFP witnesses saw.

Urban warfare
Piya said police had deployed about 1 000 rapid movement officers who were authorised to shoot on sight anyone looting, committing arson or inciting unrest, following several days of urban warfare in the capital.

The Red Shirts had defied a government deadline to leave by Monday. A military lockdown to seal off the site that was launched last Thursday had left more than 40 dead in six days of violence.

Several thousand protesters, including many women and children, were inside the rally base when the army moved in.

Some were openly crying and others put on face masks in fear of tear gas attacks. Their leaders later asked them to disperse and walk towards an area where the government had laid on buses to take them away.

Hundreds of army and police had advanced towards the protest zone in the pre-dawn hours, with trucks dropping off troops wearing balaclavas and carrying weapons and riot shields, while a helicopter circled overhead.

The Reds are campaigning for elections to replace the administration of Prime Minister Abhisit Vejjajiva, which they consider illegitimate because it came to power with the backing of the army in a 2008 parliamentary vote.

They are mostly supporters of fugitive ex-premier Thaksin Shinawatra, who was ousted in a 2006 coup. A controversial court ruling ejected his elected allies from power, paving the way for Abhisit’s government to be appointed.

Many countries have warned their nations against travelling to Thailand. Australia on Wednesday said travellers should not visit Bangkok, citing the deteriorating security situation. — AFP

Trawling the streets of Asia for food

Hundreds of schools to shut as toxic smog chokes Bangkok