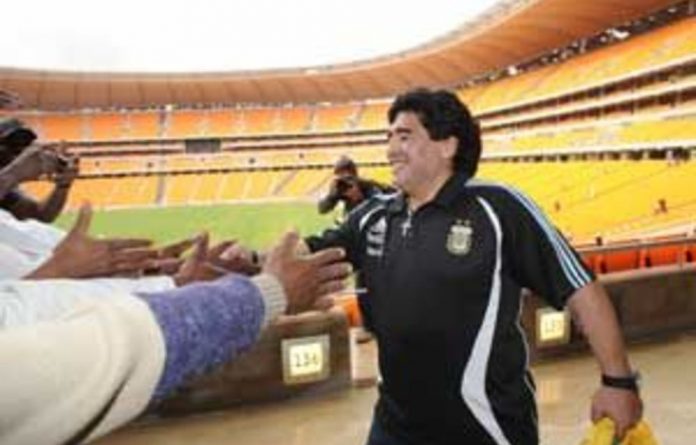 Diego Maradona named his final 23-man squad for the World Cup on Wednesday, which includes Lionel Messi of Barcelona, Carlos Tevez of Manchester City and most of Argentina’s other big stars.

The big surprise was the inclusion of defender Ariel Garce, who played his first international match for Argentina earlier this month against Haiti.

Argentina faces Canada on Monday at River Plate’s stadium in Buenos Aires, in what is expected to be its last warm-up before the World Cup. The 1978 and ’86 champion opens on June 12 in South Africa against Nigeria and also faces Greece and South Korea in Group B.

Argentine officials confirmed for the first time that the team will depart for South Africa on May 28.

Maradona will have as many weapons as any coach in the World Cup.

He is likely to start Messi with Tevez or Higuain up front with a midfield anchored by Javier Mascherano, Juan Sebastian Veron, Jonas Gutierrez and Angel Di Maria. The four starters on defence are expected to be Nicolas Otamendi, Martin Demichelis, Walter Samuel and Gabriel Heinze.

The starting goalkeeper is almost sure to be Sergio Romero of Dutch club AZ Alkmaar.

Garce was one of the few surprises, having played only once with the national team in a 4-0 victory over Haiti earlier this month.

Garce was suspended for six months for doping in 2006 and plays for the Argentine club Colon. He was preferred to Inter Milan defender and captain Javier Zanetti.

Argentina struggled to reach the World Cup, qualifying fourth — the last automatic spot from South America. Maradona has been in charge for 19 months but has failed to show the same great flair as a coach that he had as a player.

Maradona was invisible on Wednesday, but was expected to hold a news conference over the weekend. The Argentine federation released the player list on its website, which was clogged for several hours as fans scurried to see the final squad.

The Gauchos were eliminated in the quarterfinals in the 2006, and were knocked out in the group stage in 2002. In 1998 in France, Argentina also reached the quarterfinals before being ousted. In 1994 in the United States, Argentina reached the final 16 before going out. In that World Cup — his last as a player — Maradona was suspended after the second match for testing positive for what was described as a “cocktail” of performance-enhancing drugs including ephedrine.

Argentina lost the final at the 1990 tournament in Italy, which came four years after its World Cup title in Mexico.