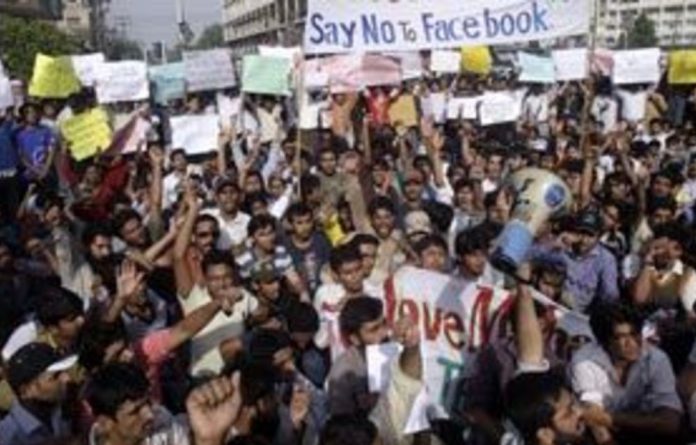 Pakistan blocked access to Facebook on Wednesday on a court order over a competition encouraging users to post caricatures of the Prophet Muhammed on the social networking site.

The “blasphemy” caused by a Facebook user who set up a page called “Draw Muhammed Day”, inviting people to send in their caricatures of the Muslim prophet on May 20, could inflame parts of the conservative Muslim nation.

Thousands of young people and Muslim faithful had already unleashed an online campaign, leading to isolated protests that grabbed the government’s attention and saw the controversial page blocked on Tuesday.

But a group of Islamic lawyers went a step further on Wednesday and petitioned the court to order a blanket ban on Facebook in Pakistan.

Islam strictly prohibits the depiction of any prophet as blasphemous and Muslims all over the world staged angry protests over the publication satirical cartoons of the Prophet Muhammed in European newspapers in 2006.

“Pakistan Telecommunication Authority [PTA] has directed all concerned operators in Pakistan to block website www.facebook.com till further order,” it announced in a statement.

Justice Ejaz Chaudhry directed the PTA to block Facebook until May 31, when the Lahore High Court will open a detailed hearing into the case.

The petition also called on the government to lodge a strong protest with the owners of Facebook, lawyer Rai Bashir told Agence-France Presse.

Facebook, which is based in the United States, was not immediately reachable when contacted by AFP for comment.

The PTA released a toll-free number and email address, asking to be notified of “all similar URLs where such objectionable material is found”.

Nayatel, a leading internet service provider, notified clients that it had blocked access to Facebook until May 31 in compliance with the court order.

“Facebook has been holding a competition to draw caricatures of the Prophet Mohammad and has not removed the objectionable hate materials despite thousands of emails from Pakistani Facebook community,” it said in a statement.

At least two other service providers confirmed they would follow suit.

Calls for ban on Western websites
Hardline Islamic party Jamiat Ulema-e-Islam, an ally of the main ruling Pakistan People’s Party, welcomed the court order and called for a complete ban on all Western websites “promoting liberal culture and obscenity”.

But the ban sparked mixed reactions in the country, which has seen creeping religious conservatism for decades but has a sizeable elite who are Western educated and relatively moderate.

Some Facebook users said they were de-activating their membership of the popular website, while others hit out at the blanket censorship.

“If some say we are extremists, then yes we are on this issue because we cannot tolerate any blasphemous act by anyone against the Prophet Muhammed,” said Mohammed Amir, 32-year-old student in the eastern city of Lahore.

In Pakistan’s southern port city of Karachi, about 2 000 veiled women from the Sunni radical Islamic party Jamaat-e-Islami staged a protest rally demanding Pakistani government for a permanent ban on facebook in the country.

About 20 people demonstrated outside court in the eastern city of Lahore, carrying banners condemning Facebook and praising Muhammed.

But local journalist Mehmal Sarfraz, 29, an avid Facebook fan, told AFP that instead of a knee-jerk ban, the authorities should respect “the Pakistani nation’s right to choose”.

In June 2008, a suicide car bombing outside the Danish embassy in Pakistan killed eight people and wounded 27 in a possible backlash over newspaper cartoons of the Prophet Muhammed, which were first published in Denmark.

Pakistan briefly banned YouTube in February 2008 in a similar protest against “blasphemous” cartoons of Muhammed.

YouTube said an internet service provider complying with Pakistan’s ban routed many worldwide users to nowhere for a couple of hours. — AFP