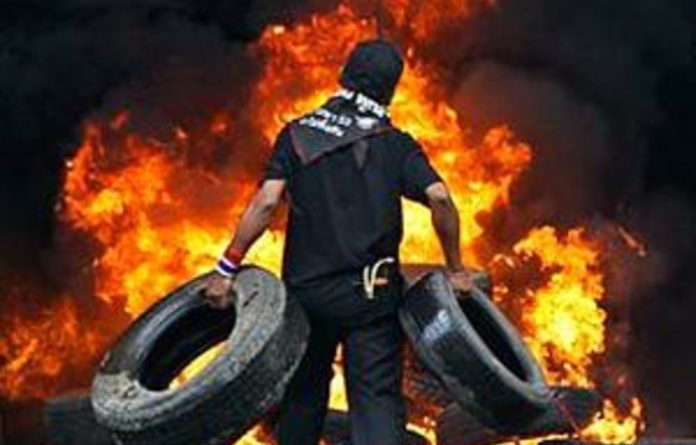 Thai authorities restored order in Bangkok on Thursday after a night of rioting and fires that veered towards anarchy as troops took control of an encampment occupied by thousands of anti-government protesters for six weeks.

Protesters had deserted their once-barricaded three-square-kilometre stretch in central Bangkok. Hundreds who had taken refuge in a temple were coaxed out by police with loudspeakers urging them to go home. Six bodies were found inside.

Troops had faced heavy resistance overnight by several protesters with guns at the temple in a stand-off that a government spokesperson described as organised by terrorists.

“This was organised violence,” he said.

Fires at 39 sites still simmered but most had been extinguished. Central World, South-east Asia’s second-biggest department store, was mostly destroyed, many of its steel beams had collapsed and its windows shattered.

The mostly rural and urban protesters’ tented encampment in the heart of Bangkok’s commercial district — an area lined with luxury hotels and shopping plazas — was strewn with rubbish, clothing and the smell of refuse and human waste. Troops roamed the area and some were positioned on an overhead subway system.

Some soldiers fired into the air as they approached the temple overnight, but “Red Shirt” protesters offered no resistance. Many walked, heads bowed, past lines of police and troops as they left the temple to be bussed home.

The surrender of key protest leaders on Wednesday and a seeming end for now to violence that has killed at least 50 people and wounded nearly 400 in six days could put the focus back on early elections and a “reconciliation road map” the prime minister had proposed before the latest bout of violence.

But a night curfew imposed on Wednesday in Bangkok and 23 provinces was extended for another three nights, raising questions of whether the government feared more trouble at a time when Thais remain deeply polarised.

“The crisis of the past few weeks has … only deepened the divisions within Thailand, which will sustain political tensions and lead to opportunistic political attacks,” said Roberto Herrera-Lim, Asia director of the New York-based Eurasia Group.

The unrest has severely hit Thailand’s tourism industry, a key employment sector. Passengers at the main Bangkok airport have been halved to 60 000 to 70 000 daily and daily flights have been cut to 600 from 750, state Thai News Agency reported.

One of the fires also badly damaged the stock exchange.

The market will be closed on Thursday and Friday and the Bank of Thailand said banks around the country would also stay shut. The whole week has been declared a public holiday in an effort to keep people out of central Bangkok.

Television channels have been ordered to only air sanctioned programmes, broadcasting images of bulldozers pushed aside tyre and bamboo barricades as workers in trucks, under the protection of troops, cleaned up the protest camp site.

A single Red Shirt flag in the rubble flew limply in the morning breeze until it was crushed by a bulldozer.

Curfews
Authorities imposed the curfew on 24 provinces — about a third of the total — after outbursts of unrest in seven regions, particularly in the north, a Red Shirt stronghold. Town halls were set ablaze in three northern areas.

The protesters are mostly drawn from the rural and urban poor and largely back former prime minister Thaksin Shinawatra, a populist tycoon who was ousted in a 2006 coup and now lives in self-imposed exile to avoid a jail term for graft.

They started demonstrating in mid-March, demanding that the government step down and new elections be held. More than 70 people have been killed and nearly 2 000 wounded since then.

Early this month, Abhisit offered an election in November, just more than a year before he needed to call one, but talks foundered and that offer is now off the table. — Reuters