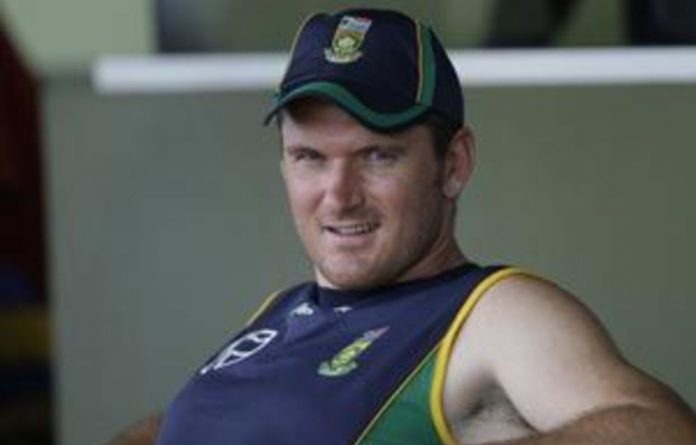 Ryan McLaren kept his nerve in a tense final over to help South Africa formalise a one-run victory over West Indies, and sweep their two-match Twenty20 International series on Thursday.

McLaren fired in a low full toss very wide of off stump, as West Indies, chasing a modest victory target of 121, required three from the final delivery of the match.

But he conceded just one run, after South African point fielder Jean-Paul Duminy swooped on the ball, when West Indies tail-ender Jerome Taylor essayed a slog at it, and it trickled away.

“It was a bit tense at the end, so we had to find somebody to remain calm, and Ryan kept a good sensible head, although we had a few guys running all over the place, but it was an exciting finish, and nice again to get over the line,” South Africa captain Graeme Smith said.

“We have performed well enough in tense situations like this before, although our record in such situations in competition play is quite poor, but we have performed really well again under pressure in a game that we probably shouldn’t have won, so it’s to our credit, and the confidence is definitely growing.”

South Africa also won the opening match on Wednesday by 13 runs at the same venue to take a psychological boost into the five One-day Internationals between the two sides, which open on Saturday at the Sir Vivian Richards Cricket Ground.

Newcomer David Miller had battled to the top score of 33 from 26 balls, and Johan Botha made 23 from 22 balls to add some respectability to the Proteas’ total of 120-7 from their 20 overs.

They added 57 for the sixth wicket, after the West Indies’ bowlers exploited an uneven Vivian Richards Cricket Ground pitch to floor the South Africans on 59-5 in the 13th over.

Taylor was the most successful West Indies bowler with flattering figures of 3-14 from his allotment of four overs, and Darren Sammy captured 2-16 from his four overs.

South Africa put West Indies under early pressure, when Dale Steyn trapped West Indies captain Chris Gayle lbw for a two-ball duck in the first over, and Morne Morkel had fellow opener Andre Fletcher caught behind for four in the third over to leave the home team on 9-2.

But South Africa were put on the defensive, when Shivnarine Chanderpaul joined Dwayne Bravo, and they put West Indies back on track with a stand of 68 for the third wicket.

Substitute fielder Roelof van der Merwe dropped Bravo, on 10, at backward point off McLaren in the 10th over, and the West Indies all-rounder proceeded to gather the top score of 40 from 45 balls.

South Africa regained control, when they removed four wickets — including Chanderpaul and Bravo — for 12 runs between the 15th and 19th overs to leave West Indies 99-6.

Carelessness by the Proteas saw West Indies inch closer to their target, and the home team required 15 from the last over.

McLaren, whose five wickets the previous day had wrecked West Indies’ batting, conceded 10 to Sammy from the first three balls — a deuce to deep mid-wicket, a top-edged four to third-man from a thick edge, and an all-run four.

The Proteas fast-medium bowler however, restricted Sammy to a single to square leg with a well-pitched yorker from the next delivery, and then saw left-hander Narsingh Deonarine run out off the penultimate ball before choking Taylor.

Gayle was bitterly disappointed, and almost close to speechless about how his side squandered another opportunity for the second straight day.

“There not much that I can say at this point in time,” he said. “If we can’t get 121 runs, it means our cricket is definitely in a state.”

He added: “We still have the five One-day Internationals in which to try and turn things around before the three Tests, but I feel as if I am repeating myself here in this situation.” — AFP