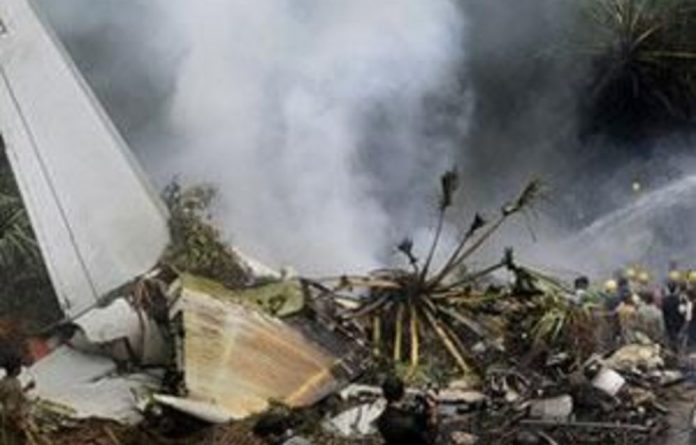 An air crash in India that killed 158 people has underlined fears about safety gaps in the country’s booming airline industry and raised doubts about whether infrastructure can keep pace with rapid economic growth.

It was not clear what caused Saturday’s crash, but pilots and aviation experts say regulatory oversight of safety and quality control are often poor. Staff training standards are also falling, they say.

Although India has had few major accidents in recent years, some half a dozen mid-air misses over the past year has underscored that safety issues exist.

Last year an Indian Airlines plane with about 150 passengers on board barely avoided a collision with an army helicopter that was part of the Indian president’s entourage in Mumbai.

Indian media regularly reports about routine checks finding pilots reporting drunk for duty and in one instance last year pilots and crew were involved in a mid-air scuffle, leaving the aircraft to fly on its own for sometime.

“The Air India Express crash was waiting to happen,” said A Ranganathan, an airline safety consultant and pilot instructor.

“Safety standards in Indian aviation have been on the wane for the last six years. Efforts being made to correct the drift, but the systematic rot is so deep … we are not likely to see any improvement in safety unless drastic changes are made.”

Sustained robust growth has put more money in people’s pockets, spurring air travel and an exponential growth in the number of low cost airlines. Domestic passenger traffic has tripled and international traffic doubled in the past five years.

But infrastructure may not have kept pace and a shortage of staff may be stretching both airlines and traffic control staff. Indian Commercial Pilot Association said in a statement 78% of crashes took place due to fatigue-related human error.

“You also need to augment the strength of air traffic control which is stretched,” Kapil Kaul, head of the Centre for Asia-Pacific Aviation in South Asia, told Reuters.

‘Disaster waiting to happen’
The hill-top airport at Mangalore, the site of Saturday’s crash, had other geographical challenges, and critics say the runway, though adequate for landing the Boeing 737 that crashed, was not long or wide enough to leave any room for error.

“This was no accident, but the direct result of the deliberate failure of officials at the high levels,” said a statement of Environment Support Group which had sought to block the construction of the runway. While it was yet to be established if the accident was related to wider problems in India’s aviation industry, experts say a lack of training, overworked staff and inadequate infrastructure only compounds the situation.

For instance, only seven radars serve Indian air space and only big airports have the latest low-visibility landing systems, a senior official of the Airports Authority of India told Reuters.

“A disaster was waiting to happen and we have been very lucky to have had no major accidents in the past 10 years,” the official involved with aviation security said on condition of anonymity because of the issue’s sensitivity.

In April 2008, then director general of civil aviation, Kanu Gohain, told the Mint newspaper that India had just three inspectors for 10 commercial airlines and 600 planes.

That number has now gone up, but many remain under-trained and a backlog of lapsed inspections may take years to clear.

A 2006 safety audit by the International Civil Aviation Organisation listed India as worst on “technical personnel qualification and training”.

As the airline sector expanded, a shortage of pilots was met by hiring foreign pilots, about 565 of them flying now. But the government has ordered airlines to replace them with Indians by next summer, raising concerns about how the country will be able to produce enough qualified pilots so quickly. There are also calls to make inquiries into air accidents transparent. “To my knowledge in the last 50 years no inquiry report has been made public,” Kaul said. “There is also the need for an independent safety board.” – Reuters