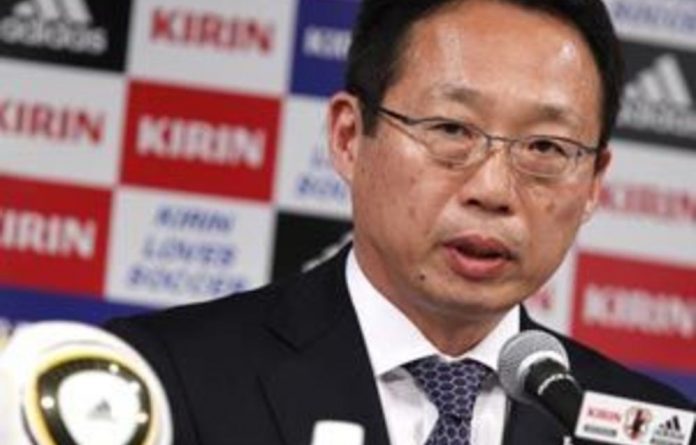 Japan coach Takeshi Okada came under fresh fire on Tuesday for asking his boss if he should quit after a shock 2-0 defeat to Asian rivals South Korea in a pre-World Cup friendly.

Japan Football Association president Motoaki Inukai immediately told Okada to stay on for the tournament in South Africa, but Japanese media lashed out at the coach’s action as irresponsible.

“We worry about the coach’s mental condition,” the Daily Sports commented on Tuesday, the morning after the one-sided loss made Okada’s much-touted target of a World Cup semifinal spot sound even more unrealistic.

“He acted in a way which might have left his whole team feeling he is irresponsible,” it said.

The Sports Nippon said: “Okada’s Japan are pushed to the verge of collapse. Can players follow a manager who tries to give up his command in the phase of a final tune-up?”

They rarely penetrated the Korean box before a sellout crowd of 58 000 in Saitama.

The Daily Hochi said Japan will head to high-altitude training in Switzerland “with a sense of crisis” ahead of their Group E clashes with Cameroon, the Netherlands and Denmark.

The influential Asahi Shimbun, meanwhile, warned: “The manager reputed for his unwavering approach is going astray.”

Okada told a post-match news conference he was sorry for having his squad bow again to South Korea after a 3-1 loss at the East Asian championship last February. FA president Inukai kept faith with the coach after the first defeat.

“This will inevitably lead to a question of responsibility,” Okada said voluntarily, adding that he had asked Inukai about his tenure.

“The president told me to ‘go on’ and I believe we will only have to go forward,” Okada added.

“It is not that I have lost my confidence but I wanted to ask him the question because he may also become the centre of debate.”

He added that even if Japan lose their last two training matches against England and Ivory Coast, “we won’t change the system.”

Okada said he might switch his strategic emphasis from aggressive passing football to a more defensive approach.

“We cannot pass around in midfield when we are under pressure. We may possibly fight with defensive players in the first half and then use players who can pass when spaces can be found in the second half.”

Honda, who joined CSKA this year and helped the Russian side reach the UEFA Champions’ League quarterfinals for the first time, admitted: “We were definitely outdone in individual skills.

“It was such a disastrous result but we will go to beat Cameroon,” he added, referring to their World Cup opener on June 14 in Bloemfontein.

“We need to do something to turn the worst situation into something positive.” — AFP

The ATP and WTA tours last week removed ranking points from Wimbledon after the All England Club banned Russian and Belarusian players.
Business

There is a lot bearing down on South African consumers and, without growth, the economy stands to decline
National

Three countries in sub-Saharan Africa notorious for consistently executing people – Botswana, Somalia and South Sudan – were responsible for all the known judicial executions in the region in 2021
Advertising