Warning: World Cup may be hazardous to your health 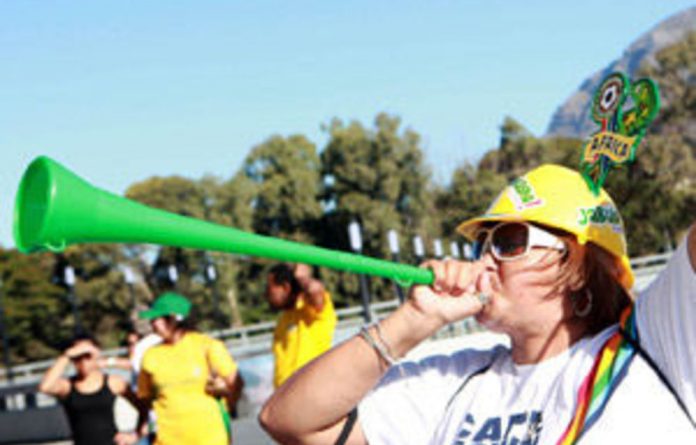 South Africans have been warned that the emotional stress of watching a Bafana Bafana match may double their risk of a heart attack, even without a history of coronary artery disease.

Professor Hoosen Vawda of KwaZulu-Natal University told the M&G that the stress from buying tickets and the anxiety of the game itself could be hazardous to the small proportion of fans who have an underlying heart condition.

Other factors that could increase the risk of a heart attack were the consumption of fast food and alcohol, as well as smoking.

Also at risk were those who were in denial about their heart condition, or those who refused to take their medication, said Vawda, who is a lifestyle disease specialist.

A study published in the New England Journal of Medicine on the cardiovascular effects of World Cup matches on residents of Bavaria in Germany — following the hosting of the tournament in 2006 — found an alarming increase in the incidence of heart attacks during and after the event.

On days when Germany was playing, the rate of heart attacks and other coronary episodes in men was three times higher, and nearly twice as high in women. In patients with a history of coronary artery disease, the risk was found to be four times higher.

Based on these observations, researchers concluded that watching a stressful soccer match more than doubled the risk of an acute cardiovascular event.

“Spectators, fans, officials, players and support staff with coronary heart disease are most prone to heart attacks, irregular [heart] rhythm, heart failure, and fatal myocardial infarction because these individuals have underlying narrowing in their vessels and during stressful periods the heart rate increases, resulting in an increased demand for oxygen,” said Vawda.

He said in recent years, healthcare professionals had noted an increase in lifestyle diseases, which affected the quality of life in populations in both affluent and emerging economies.

“Accompanying this socio-financial freedom is an entrapment in the snare of traditional lifestyle disease, previously of miniscule incidence in the African populations in South Africa,” said Vawda.

Defective gene pools predispose certain racial groups to the effects of lifestyle diseases, such as heart attacks or strokes. Black South Africans — who do not have the genetic predisposition — are now more at risk of strokes and coronary artery diseases because affluence has resulted in a change in their dietary habits.

“The dictum that is often used in clinical circles is that the “higher the salary, [the] higher the risk of a heart attack,” said Vawda.

This is corroborated by statistics from the public sector, confirming an increased number of African patients in the cardiac units.

The Soccer World Cup claimed its first heart attack victim in April this year, when a 64-year-old Cape Town pensioner died while waiting in a queue to buy his tickets.

But heart attack victims are not always over 40-year-olds.

“Research centres and healthcare providers have noted the incidence of diabetes mellitus, high blood pressure and heart attacks increase at an alarming frequency, in younger age groups in both genders. Individuals as young as 25-years are succumbing to coronary artery disease from fatal attacks,” said Professor Prakash Naidoo, head of cardiology at Inkosi Albert Luthuli Hospital in Durban.

He has already seen a 23-year-old patient admitted to his cardiology unit, following a heart attack.

The World Health Organisation estimates that coronary artery disease will become the number one killer in sub-Saharan Africa by 2020.

How do you know you are having a heart attack?
According to Vawda, there are two categories of heart attacks.

A category-one patient will know they are experiencing a heart attack if they feel central chest pain, “almost as if someone is sitting on your chest”, shortness of breath, sweating and heart palpitations. Category-two patients are those with pre-existing long-standing diabetes.

Symptoms of a silent heart attack include pain in the upper part of the abdomen, shortness of breath, or pain in the neck and the left arm.

“If you are unsure see a doctor before the game and make sure that you take you prescribed medication religiously,” said Vawda.

“Also don’t get worked up, take it easy and enjoy the sporting event.”

There are also preventative measures that can be observed by patients with coronary artery disease. Dr Lori Mosca, director of preventative cardiology at New York-Presbyterian Hospital offers advice.