‘Tell the truth as it is’ 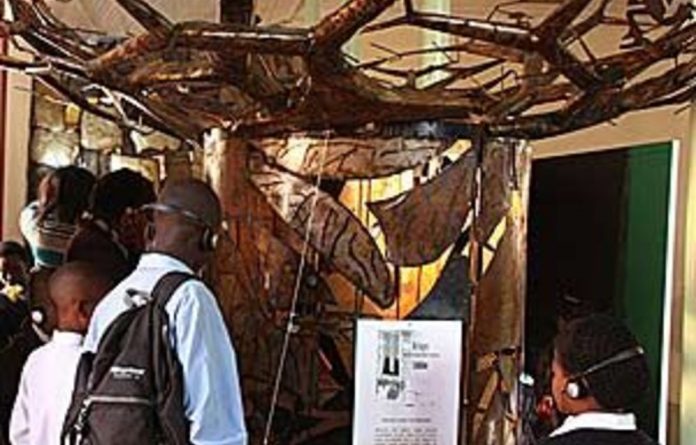 Suddenly everyone fell silent. A young boy, dressed in traditional leopard skins, began to drum. Other boys and girls from Albert Street School drama club streamed into the church to perform their award-winning play, about an albino man and a beautiful princess who fall in love and have to confront the prejudice of their families and communities.

Life as a refugee: a story through art

They were prevented from travelling internationally to showcase their stories, but this hasn’t stopped refugee children from the Central Methodist Church’s Albert Street School in downtown Johannesburg from speaking out against xenophobia. Watch their work and hear their stories.

In 2009, this same play won a Johannesburg inner city drama competition. Soon afterwards, the young actors were invited to perform at a Human Rights Day festival in Botswana.

But the children of Albert Street School were never able to cross the border.

It wasn’t a question of funding — the Solidarity Peace Trust (SPT) was willing to cover their travel costs. The problem was passports.

Albert Street is no ordinary school. Almost 90% of the children come from Zimbabwe, and about 8% are from other African countries. More than half the school’s students are refugees. Some are sponsored by SPT but most are under the care of Bishop Paul Verryn and the Central Methodist Church.

Because of their refugee status, the drama club children lacked the necessary papers to allow them to leave South Africa — even for a few days. Appeals were made to the authorities, but to no avail.

No time
The Department of Home Affairs promised to do what they could to help. But there was not enough time to see the process through.

Although they were prevented from going to Botswana, the students decided to record their personal stories and sent these recordings to the festival instead. In this way, they felt their voices would still be heard.

And now — one year later — the exhibition has come back home to Albert Street School, thanks to GTZ: a German NGO. Helmut Obron, from GTZ in Botswana, told the M&G: “We just wanted to do something that shows the people in the Methodist Church that they are not alone and that they are not forgotten.” Obron is also the head of the of GTZ’s Southern African Development Community programme which brought the exhibition to South Africa

The exhibition is highly interactive, with the students’ stories playing a vital role in the artworks. In one exhibit — “the Cloud of Dreams” — written reflections are suspended from the ceiling. One child has written: “It is painful to be here in South Africa because sometimes there will be no food to eat, and we are struggling to go to school. To achieve our dreams we have to go to school.”

A sculpture of a baobab tree is another focal point for young people’s voices. A plaque explains that a baobab is a tree “where we children would always gather under, to receive wisdom from you adults”. From its “branches” hang sets of headphones. Visitors are encouraged to stop, put on the headphones and listen to stories told by children. Their stories describe dangerous border-crossings and the pain of being forcibly moved to one new shelter after another. Notebooks and pens are attached to the tree so that visitors can write down their responses.

Never again
At the exhibition’s ribbon-cutting ceremony Verryn spoke of the people who died in the 2008 xenophobic violence. “We are here today to remember them, and to make sure that it never, ever happens again,” he said.

“As I cut the ribbon, it’s also a protest against the humiliation and disrespect of people. Nobody deserves to be disrespected,” he added.

Many of the poems performed at the opening ceremony posed questions: “South Africa, South Africa, how could you? How could you destroy my hope, my future? My destiny and my right to education as a child?” asked one young poet.

Albert Street school principal, Alpha Zhou, believes that the process of creating art for the exhibition is essentially therapeutic. “The best, when you have stress or pressure, is when you say it out and it is shared by so many people,” Zhou told the M&G. “We think the exhibition is also part of the healing process.”

For Selvan Chetty, SPT’s deputy director, one of the causes of xenophobia is: “The lack of awareness and education about why these people are here, and what they have gone through.”

“It is our hope that in sharing these stories, healing and understanding will begin,” he added.

Tapfuma*, a grade 12 student at Albert Street School, agreed. “Sometimes it’s frightening and risky to speak about such issues in public,” he said. “But I have to tell the truth as it is.”

Ma Lindi, we will gather for tea and cake