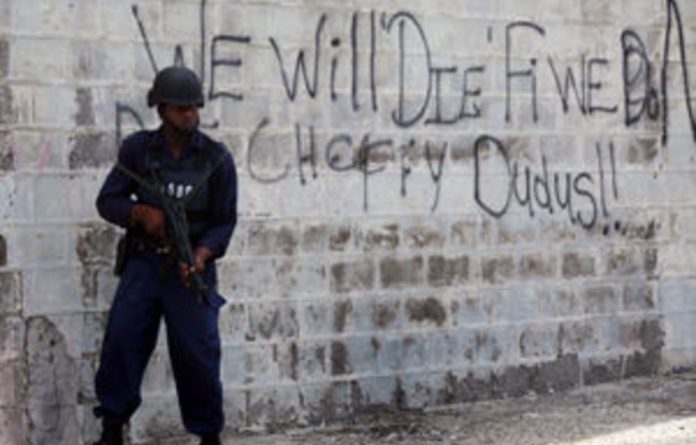 Jamaican forces claimed control of a slum in an offensive to capture an alleged drug kingpinlate on Wednesday, but fears mounted for civilians with officials saying at least 44 were killed.

Calm returned to much of the capital Kingston after a three-day assault, but bullets and the occasional body littered impoverished areas where soldiers systematically searched and detained those who dared pass through.

Authorities said they had seized more than 500 people but not the man they were seeking — local don Christopher “Dudus” Coke, who has set up a virtual mini-economy in slums a world away from Jamaica’s famous beaches.

Information Minister Daryl Vaz said Coke’s whereabouts were unclear and declined to comment even on whether authorities were certain he was still in Jamaica.

Prime Minister Bruce Golding ordered an assault to capture Coke on Sunday after months of hesitation on an extradition request from the United States, which accuses Coke’s “Shower Posse” of funneling drugs to the United States.

Golding has pledged to undo Kingston’s reputation as one of the world’s murder capitals but also ordered an inspection of conditions amid fears of a heavy toll on bystanders.

The public defender, Earl Witter, and ombudsman, Hero Blair, said they counted the bodies of 44 civilians after a tour of Coke’s Tivoli Gardens stronghold.

Schools remain closed
Police had said Tuesday that 26 residents and one soldier were killed in the operation, though hospital staff spoke of dozens of bodies coming in.

Police have also reported the deaths of two policemen and several civilians in other parts of Kingston.

Vaz said that downtown businesses near the slum area would reopen on Thursday but schools would remain closed.

Police spokesperson Karl Angell said security forces had seized control over all tall buildings in the area but were combing door to door to search for wanted criminals.

Some of the worst violence has taken place near the original headquarters of Studio One, among Kingston’s most influential labels that has put out recordings by reggae legends Bob Marley and Lee “Scratch” Perry.

Near the studio’s padlocked door, a resident urged bystanders to get away.

“Calm here now, but gunfire here, gunfire there,” he said, pointing in all directions.

The line between civilians and combatants has become blurry in the Tivoli Gardens violence. Some describe the gunmen as a citizens’ militia that enforces security in the neighborhood and, above all else, protects Coke.

But the violence-torn area also has the ear of political leaders. Both Golding and Kingston’s mayor, Desmond McKenzie, represent Tivoli Gardens in elected office and Coke has supported their Jamaica Labour Party in the past.

‘These people have rights too’
McKenzie said he traveled to the affected area overnight and heard accusations of “harassment” by security forces, including indiscriminate shootings and destruction of personal property.

“These people have rights, too,” McKenzie said on Jamaican television.

“They are hungry. A lot have not had a proper meal since Sunday.

“What is on my mind is trying to get some comfort to them. I know the community is hurting and is upset with us,” he added. “It is going to take us some time to rebuild that trust and rebuild the confidence.”

The Jamaican Red Cross, which accompanied officials on the earlier tour of Tivoli Gardens, said it would deliver food into the area to meet residents’ needs.

But in a sign of humanitarian fears, the health ministry appealed for blood donations. The ministry said supplies were at “critically low levels,” but explained this was partially due to disruptions at hospitals rather than an urgent need for blood.

The United States has staunchly supported the crackdown and refused to criticize Golding, whom the opposition charges could have moved in months ago to seize erstwhile supporter Coke and avert the crisis.

“We certainly support the efforts of the government of Jamaica to strengthen the rule of law and arrest Christopher Coke,” Crowley said. — AFP