Temple of the scuffed boot 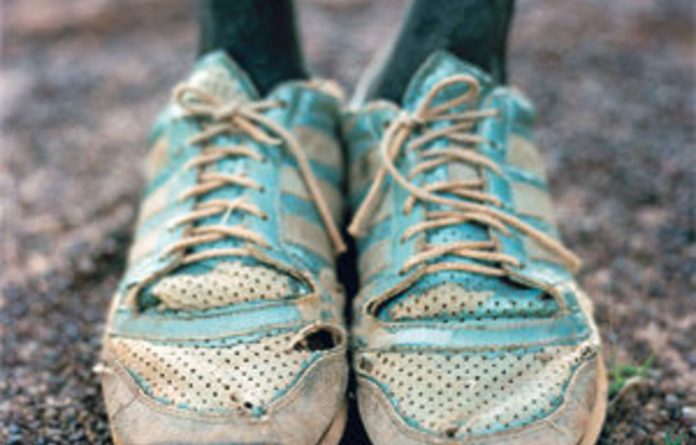 Belgium-born photographer Jessica Hilltout boarded a flight to Cape Town from Brussels armed with her Hasselblad camera, an 80mm lens, 300 rolls of film, a digital camera and a stock of new footballs. Starting off in an old VW Beetle and later kitting out a Nissan Vanette, Hilltout travelled 5 000km across six countries in West Africa in her quest to capture the essence of Africa’s passion for the game of football.

The outcome of her nine-month journey, a book titled Amen, pays homage to Africa. Hilltout says: “It is a tribute to the forgotten, the majority who live and will remain in the shadow of the World Cup … they deserve to have a light shone on them, not just to show their passion for the game, but also to reveal the fundamental energy and enthusiasm that shines through [in] the way they live.”

Hilltout focuses on the details, the seemingly unimportant, the apparently hidden, and finds beauty in all. With her photos of tired balls, stitched and patched together, broken shoes and torn T-shirts emblazoned with favourite players’ names, her work is proof that beauty can be found anywhere. Amen, her most ambitious work to date, finds beauty and joy where others may see only sadness and deprivation.

You say football is something of a religion in Africa. Why the analogy?
Yes, the central idea of the project can be summed up in one simple sentence: “In Africa football is not a religion, but it is everything a religion should be.” I would argue it is the strongest religion there is in Africa and without it I think people would be a lot less happy. It is a mechanism of survival and brings people together the way religion does. It is accessible to all and is played everywhere — all you need is an open space, goal posts and a ball, all of which I found improvised in Africa.
In every little village, no matter how far off the main road, I’d find people playing football at sunrise and sunset. One small village could have as many as five football fields. Waking up at dawn I’d join the players and spectators gathering together on the football field, like we were congregating at a shrine or a temple. There was a true sense of devotion to the game.
This religious connotation is also where the title of the work came from. Everybody I parted with said: “Amen, amen. May this project work. Amen, amen, amen.” It goes with the attitude I found everywhere in Africa — an acceptance of fate, a calmness, a great sense of dignity as people strove on despite the hardships.

Amen: an exhibition by Jessica Hilltout

Based on the concept “In Africa football is not a religion, but it is everything a religion should be,” Belgium-born photographer Jessica Hilltout traveled Africa for nine months to uncover the devotion of the African people to a game quite literally larger than life.

Are these fans being forgotten in the World Cup hype?
Yes, I think they are being forgotten. Although they accept not being able to attend the matches, they still want to be a part of the event. I don’t think people realise the extent to which life in Africa revolves around football and the extent of people’s devotion to the game. For example, I stayed in a village that was more than 500km off the main road, where the residents walked three days to attend a football match. And we’re not talking about an official match, just one between neighbouring villages. So the World Cup is certainly a huge event for them — it’s a reason to drink, to dance, to play music and to be together.
This is why I am sad to see how the World Cup is becoming less about football than about sponsorship and money and control. I really want to shine a light on all those who have been forgotten in this whole thing because football is really the game of the masses.

You say that this continent accepts its fate with elegance and grace. Is that not just casting a warm light over what is really a very hard reality?
It is a tough question because I never want to come across as the white woman who travelled through Africa and who sees all these smiling faces and who says: “You know … they are happy”. But, I can illustrate my conviction in terms of the story of the tired ball. The tired ball on one side speaks of sadness — you look at it and you think: “My God, people in this village have to play with a ball like that.” It is sad to think that this is the only ball they have and they’ve got to stitch it up and pump it up half way through a match. But then there’s the other side, which tells a different story. This tired ball holds on to life, it has a history of being loved and cared for, it is an extremely proud object. The same kind of mentality was projected by the people and I want to portray that rather than dwell on their poverty.

In telling your story you have focused on the poetic character of the small things, such as the balls and the shoes. What do these things tell you?
I’ve always been attracted to the small details in my photography, as I find that these details are the ones that tell the biggest stories. The balls were extraordinary — each one unique, like little precious presents. They are made with whatever materials people could find in their different environments. So in the desert they’re making balls out of old clothes and materials and in the city they are using plastic bags and other rubbish. The smallest ball I found was made from a sock — it’s like a little jewel to me. These balls represent hope, they talk of ingenuity. I think that is a word I would like to give to the whole African continent: ingenious. That is the core thing — they don’t have much, but they always manage.
At the beginning people wanted to know why I was photographing what they call the “tired” boots and balls. I explained that I wanted to show how nothing would stop them from playing football, no matter what they had to wear, what the ball looked like or what the goal posts were made out of. They’re just going to keep playing football; they’re not going to say they can’t play because they don’t have a proper pair of boots, like a kid in Europe would say.
I have a lot of respect for that, which is also why I never wanted to look down on the shoes I photographed. I lay down on the ground, came really close to them. And in the end, people would start helping me, running back home saying: “I’ve got a pair of shoes you’re really going to like.” So it became more of a collaboration as people started to understand what I was doing, despite the world of the image being far from their reality.
Whether it was the misshapen balls, the torn and worn shoes or the fact that some guy writes the name of his favourite player on his T-shirt, that may be a small detail, but it conveys so much about the faith and devotion to football and about the ingenuity of the African population.

What do you hope people will get from the exhibition?
I think the number-one thing I’d like to portray is the positive side of what is often seen as negative. I wanted to show Africa shining in colours, with laughter, you know; something unique, something uplifting, something right. And the second thing is the way in which with so little they can do so much. Especially because I come from a world where often it feels like a cake with too much icing — you know, everyone has everything they want, if not more. They’re drowning in it. I truly am fascinated and immensely impressed by this continent, which does so much with so little.