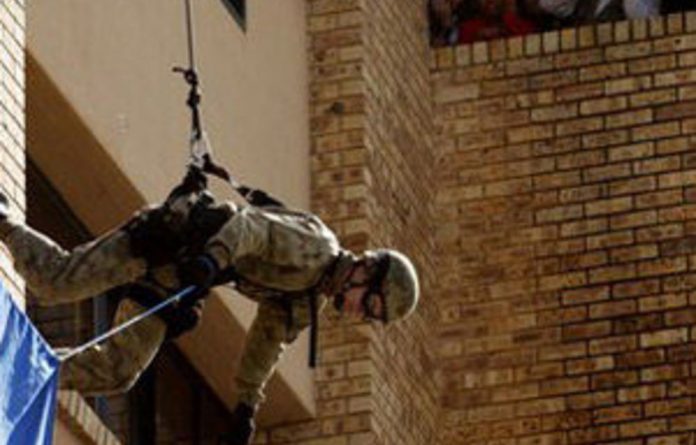 South Africa may fall victim to a terrorist attack during the World Cup it is hosting in less than two weeks, according to a report in the Sunday Times, quoting an investigative group and other sources.

The recent arrest in Iraq of Abdullah Azzam al-Qahtani, an alleged al-Qaeda supporter who claimed he was planning attacks on the Dutch and Danish teams, has revived debate on whether the tournament faces a threat of this kind.

Qahtani’s scheme was later dismissed as posing no serious threat.

South African officials have long said their non-aligned status and a lack of any substantial local support for militant groups should insulate them from attacks during the June 11 to July 11 event.

Both the government and soccer’s governing body Fifa, which is cooperating with foreign security agencies and Interpol, have helped strengthen that view by stating no viable threat had been identified.

However, analysts and security experts believe such actions cannot be ruled out because of the huge attention that even a small attack would get during the tournament.

He warned that Pakistani and Somali militants were running training camps in northern Mozambique and that trainees from these camps may have already crossed into South Africa to form or join cells planning attacks.

“I believe there is an 80% chance of an attack,” he told the paper, adding that strike teams were well established in South Africa.

“Information confirms that several venues will be targeted, some simultaneously, others at random. Reference is also made to the possibility of a kamikaze-type attack,” the paper quoted him as saying.

Phone intercepts
He said that numerous references were made to World Cup attacks in closed-frequency radio broadcasts and phone intercepts in Mauritania, Algeria, Mali, Pakistan and Yemen.

However, the police have dismissed the allegations.

“I don’t know where they got their information from. We have all our strategies and plans in place,” Police Senior Superintendent Vish Naidoo said.

“We have intelligence briefings every day and there is nothing even suggesting what has been suggested by the Sunday Times.”

While South Africa has not been targeted in recent years, several militants involved in attacks around the world are known to have spent time in the country, which experts say has acted as a safe haven and staging post for operations elsewhere.

Critics claim widespread corruption among police and officials, including the sale of South African passports, had undermined counter-terrorism efforts.

Sandee said the match between the United States and England on June 12 could be a particular target, along with fixtures involving the Danish and Dutch teams should militants move to avenge perceived insults against Islam. – Reuters