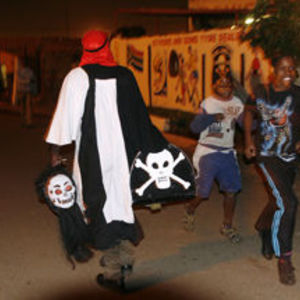 It’s strange and sudden, sometimes, the effect dress can have on people. When Orlando Pirates fan Kenneth Metiba, for instance, is in his formal pants and shirt he looks like an ordinary guy. He has nothing of the carnival aspect that exudes immediately when he dons his football regalia. In his Pirates garb — the flowing black-and-white gown, the giant hat emblazoned with the famous skull and crossbones, the leather eye patch — he’s a different creature.

Photographer Antony Kaminju and I drove to Chiawelo, Soweto, to meet the man known, affectionately, in football circles as Long John Silver.

In his Orlando Pirates garb he still arouses the interest of his neighbours, who surely must have seen him dressed like this a thousand times. In his Orlando Pirates regalia he is transformed; he’s part of a performance and the neighbours don’t want to miss it. So they file out of their houses: some stand on stoeps; a chubby adolescent from the neighbourhood, perhaps on an errand, stops by to make small talk.

‘Ola buccaneer’
The Long John Silver spectacle is one they want to behold. Some chatty passers-by see him and shout: “Ola, buccaneer!”

He smiles good-naturedly, deliberately, crossed hands held aloft, at times throwing a quip back: “Long John Silver, captain of the Caribbean. I shoot to die.”

Born in 1960, the unemployed Long John Silver has been a Pirates fan since 1970.

“Pirates is very important to me. I haven’t supported any other team,” he says, as he poses for photographs inside his small bedroom.

His small, airless domain is dominated by a giant wooden bed. The space is an eclectic mish-mash, a cross between a workshop and a shrine, adorned with flags, toy guns and other paraphernalia, and giant hats he is making for sale, stacked on a shelf. “Lots of people don’t have time for football now. But if you are a man, a real man, you can’t forget to go to ‘church’, to the stadium,” he says.

When in the lower part of the grandstand, in the stadium, with other extremely dressed fans, he is aware of the role he plays in the overall performance. Before the match, the fellow fanatics meet to choose the most strategic, telegenic seats. Then they organise themselves into a raucous army: “We sit where we can be captured on camera,” Metiba says.

Currently he doesn’t go to away matches because he is out of a job. But he doesn’t miss the local Pirates matches: “After the game, I go to a shebeen close by and have a drink while dressed like this.”

Pirates fanatic
Today, however, we are on a mission to get a full picture of Metiba’s life, and his lifestyle, as a Pirates fanatic.
He is to be featured in an exhibition with other colourful football jesters.

After the shoot at his home, we go for a drink at a shebeen nearby. At the shebeen, sparsely populated in the late afternoon, patrons shower Long John Silver with more attention than anyone else in the bar.

An hour or so later, walking towards his house, the Pirates supporter is still fielding salutations. Being a fan of Pirates has, in turn, earned him many fans. Because of his love of football, it seems, he will never be alone.

Photographer Antony Kaminju is part of Halakasha, an exhibition that unites African football and art, which will run at the Standard Bank Gallery until July 17