When the Benni dropped 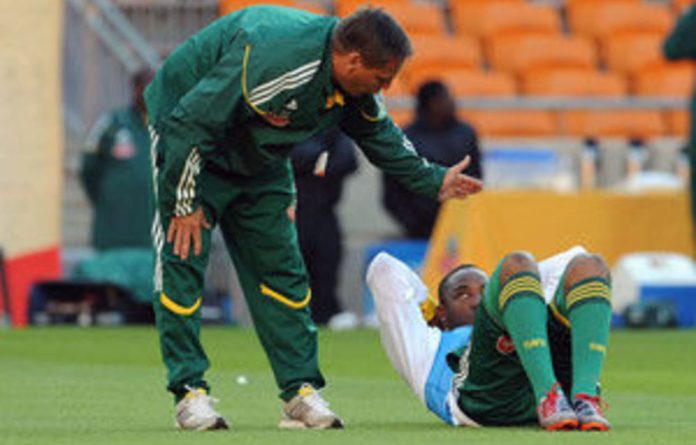 In making his Soccer World Cup squad selection this week Carlos Alberto Parreira brought an abrupt and unexpected end to an era. His choice marked not only the end of the international career of the phlegmatic Benni McCarthy but also to the foreign-based prima donna.

It is a brave, and perhaps risky, move by the coach to dump a proven goal scorer who despite his podgy appearance is arguably still the country’s top finisher.

But Parreira insists that those wishing to compete in his World Cup squad show form, fitness and, just as important, attitude. He demanded his 23-man squad meet the criteria. McCarthy patently failed, bringing to dramatic close his international career at the age of 32 and after 79 caps and a record 31 goals.

Reputation no longer equals selection
Bafana Bafana have been set new benchmarks now, which Parreira has introduced and which will likely continue with his successor.
No longer will the national team field players on reputation, past achievement and club domicile but rather those in form and with regular playing time behind them.

Previously it has been a given that top name foreign-based stars would saunter into the Bafana starting line-up, even if they were on the bench or out of contention at their clubs.

In most cases, they proved better than the locally based alternative even without regular competition but, under the veteran Brazilian coach, the policy, ethos and ethic of the side has made a drastic shift. Work and application replace acumen and experience.

Parreira decided long ago a lack of depth in the South African squad would dictate that, if he was to make any impression at the World Cup, he would need a side that was in top physical shape and well drilled.

The model of South Korea, semifinalists when they hosted the 2002 finals, is an example often held up.

Earning his millions
From early on, even during his first term in charge, Parreira insisted that before the World Cup he be given a lengthy spell of preparation with his players and many international opponents to bring his side up to speed.

Now, on a run of 11 undefeated matches and with Bafana Bafana looking more polished with each passing game, he could yet prove worth the millions he has earned in charge of the side.

McCarthy did not fit with the dynamic effort and quick tempo of the Parreira game plan. Although by no means a dressing-room lawyer, McCarthy’s presence proved divisive too. He is a talkative character but with little evidence of that fire in the belly that marked the early part of his career.

With millions in the bank, two World Cups behind him already, several national records and an exalted place in the domestic game, McCarthy did not see the 2010 World Cup as the pinnacle of his career. Rather, he sauntered in, body fat percentage markedly up since his last Bafana Bafana appearance in November, expectant of a leading role.

Failure to find a goal-scoring alternative to McCarthy over the years has seen the country repeatedly turn back to the boy from Hanover Park for salvation, even after he had twice “retired” from the team when playing for Bafana Bafana did not fit with his agenda at club level.

McCarthy was among the first of the foreign-based players to report to Parreira’s camp, but then missed a rump of the training because of a cold.

Poor attitude
There was none of the determined Parreira attitude that was evident in the rest of the squad, particularly the locally based players, who have been hard at work with him since March. As a result, McCarthy had to go.

There was evidence of the pending chop already before Monday’s match against Guatemala in Polokwane. McCarthy was left on the bench for the 5-0 win and then told in the change room straight after that he would not be going to the World Cup.

Parreira arrived considerably later than usual for his post-match press conference, visibly irritated. Conveying the bad news had palpably not been easy.

But the message is resounding. There are no more guarantees for players, particularly those now playing at foreign clubs. Fail to play regularly, stay in shape or pull your weight and the national team has other options.

Admittedly, Parreira is not the first national coach to instil this policy. Shakes Mashaba was of the same conviction when he was in charge, but did not have the eloquence or patience to get his philosophy across with any conviction.

He was ridiculed when he famously said the only difference between the ability of Tyren Arendse, a surprise selection for a friendly against England, and David Beckham was the size of their salary.

When South Africa went to their first World Cup in 1998, Philippe Troussier had completely the other approach. He believed that any player based with a European club obviously had superior ability to any still left at home on the books of a South African club. He bothered to watch just a single PSL match during his brief tenure.

That is how the unknown Lebohang Morula, who Jomo Sono had somehow sold to a provincial side in Turkey, managed to find himself in the World Cup squad. In the end his international career was made up of a single warm-up game during which it belated realised he was not a player with the ability to compete at that level.

That folly is not likely to be repeated again.