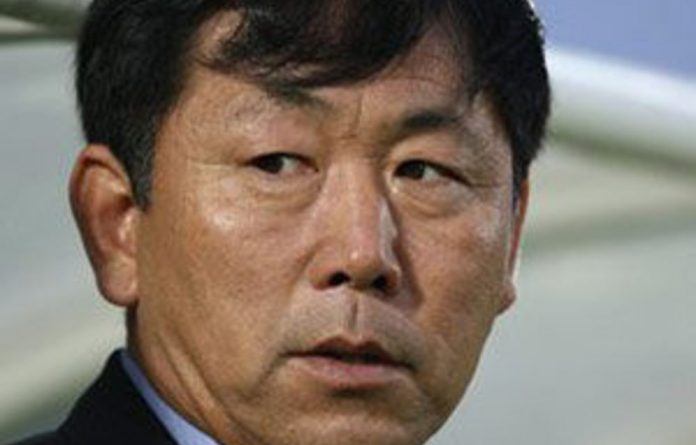 The North Korean World Cup squad held its fourth training session in South Africa on Saturday with foreign reporters yet to be allowed in.

The media-shy North Koreans, making just a second World Cup appearance and first since 1966, trained at the Makhulong Stadium in the township of Tembisa, near Johannesburg.

Access was only granted to a North Korean TV crew and Fifa’s TV unit as Kim Jong Hun’s squad prepared for a friendly against Nigeria at the Makhulong on Sunday.

Fifa is thought to be taking a “softly-softly” approach to North Korea and its media commitments, but the team from the secretive communist country is required by tournament organisers to allow journalists access five days before its first match — against five-time winner Brazil on June 15.

The coach has promised “great success” for the North Korean team in South Africa, but the lowest ranked team at the tournament, at number 85 in the world, has kept a low profile since it arrived for the tournament last week, when its players emerged wearing smart suits and waving miniature flags.

It has not kept out of the news, however.

Kim Myong Won, a forward for the Amrokgang club, was listed as a goalkeeper in the final squad submitted to Fifa. Fifa has warned the Koreans that Kim will now only be allowed to be used as a keeper, and not an outfield player.

The group has set up camp at a four-star hotel in Midrand, north of Johannesburg, where North Korean flags fly over the foyer entrance and small groups of South African policemen patrol the car park.

The red team bus has “1966 again! Victory for the DPR of Korea!” written across its side in reference to its only other World Cup appearance where it made a surprise run to the quarterfinals. Above the inspirational motto is the name Hyundai, a Fifa sponsor and car manufacturer from South Korea — its southern neighbor with which it is technically still at war with since their three-year conflict ended in a truce, not a peace treaty, in 1953.

The North Koreans are given a police escort to and from their training sessions in nearby Tembisa, a typically scruffy, haphazard South African township, where they were welcomed on Saturday by children kicking footballs in the street and blowing on vuvuzela.

A group of photographers, which was earlier kept out of the team hotel, was also not allowed access to the stadium.

The Associated Press did gain access to the hotel, and to the outside area of the stadium, where there were brief glimpses of players through the stadium windows. The team trained for a little over an hour before filing back onto the bus for the 20-minute
drive back to the hotel.

An Yong Hak and striker Jong Tae Se play in Japan and forward Hong Yong Jo of Russia’s FC Rostov is the only European-based player.

It faces the toughest of the eight World Cup groups where it will play Brazil, Ivory Coast and Portugal – the country it lost to 5-3 in the quarterfinals 44 years ago. North Korea had led the match 3-0. – AFP