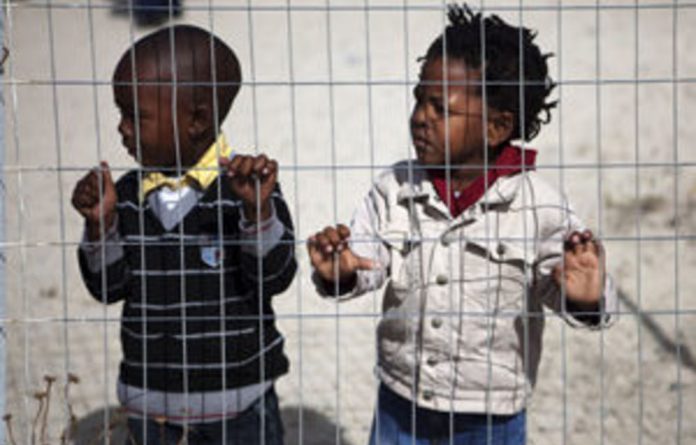 Grim rows of grey metal shacks stretch out with military precision in the barren sandy ground.

Residents call it Blikkiesdorp — “Tin Can Town” in Afrikaans — a vast, soulless temporary camp for Cape Town’s homeless and evicted that has attracted a media spotlight ahead of the Soccer World Cup.

Miles away from the city’s upscale attractions that will greet soccer fans, some residents accuse officials of using Blikkiesdorp for a World Cup clean-up in a debate that has unveiled South Africa’s crushing poverty.

“They’re moving people staying on the streets or staying in shacks in the back of the yards. They’re moving all those people to this place for 2010. They’re cleaning up basically the roads,” said Ali.

But while children gleefully undergo football training on a sandy patch near a busy road, there is little sign in Blikkiesdorp of the World Cup kick-off on June 11.

“Why didn’t they use some of that money to build houses?” asked community leader Beverley Jacobs, who is spending her third winter in one of the camp’s 18-square-metre shacks.

Priscilla Ludidi shares her shack with four children and her 82-year-old mother, who sleeps on a piece of sponge on the ground.

“They promised us it’s only three to six months until you get your houses. They always lie.”

South Africa struggles with chronic housing shortages despite rolling out 2,3-million new houses since the end of apartheid in 1994.

But a growing backlog of 2,1-million means 12-million people — nearly a quarter of the population — still need homes. And the number of shantytowns, known euphemistically as informal settlements, has rocketed to more than 2 700 countrywide.

Cape Town — which has some of South Africa’s priciest real estate — has a housing backlog of 400 000 and 220 informal settlements.

‘We are off the street’
Former homeless couple Rina Mina Kiwido and James Adams came to Blikkiesdorp last September via a social worker, with a group of people from near the Cape Town stadium.

They are aware of the claims of clean-ups to sanitise the city for foreign visitors, but are still happy with the move.

“We are off the street,” said Adams.

As foreign news crews flock to Blikkiesdorp to show a disturbingly less glamorous Cape Town, officials deny that the city is being stripped of its homeless.

“There’s no clean up campaign that is happening,” said city spokesperson Kylie Hatton, saying it gets repeated requests to move to the camp.

Frustration building
“The area was already almost 80% full by the end of last year so there is no dramatic move towards moving people into the area in the build up to the World Cup.”

But in Blikkiesdorp, frustrations are high.

“We have no other option. We’re waiting on the government to sort us out with a house, with a home. This is not home.” — AFP