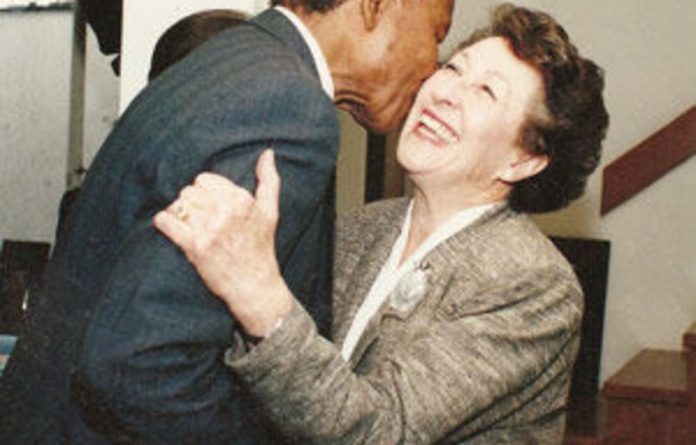 Within a month of the death of its patron, Sheena Duncan, the Black Sash has lost a second stalwart. Ethel Walt, a former Transvaal chair, founding trustee of the Black Sash Trust and the moving spirit behind the foundation of the Transvaal Rural Action Committee (Trac), died in Johannesburg on June 3 as a result of injuries sustained in a traffic accident two weeks earlier.

Walt was a person of multiple parts — activist, homemaker, devoted wife (she and her husband, Alex, celebrated 60 years of marriage in March), proud mother and grandmother, a creative, caring, nurturing human being, with time for everybody.

A woman of steadfast courage and conviction, she could, like most other white, middle-class South African women, have settled for a life of leisure and privilege, sheltered from the realities of apartheid South Africa, but that was not her way.

Walt was born in 1925 in Bothaville in the then Orange Free State, the heart of Afrikanerdom, where the family had a milking cow in the yard. By the 1990s her home town was a centre of extreme right-wing Afrikaner Weerstandbeweging activity and it was there that she and I, sent by the Independent Electoral Commission to monitor the voting process, rejoiced on April 27 1994 in our first view of the new South African flag, waving proudly over, of all unexpected places, the local police station.

Her family relocated to Yeoville, Johannesburg, when she was a young girl and in 1950 she moved to Cape Town when she married Alex, a born-and-bred Capetonian, whom she met while on holiday. There she raised her three daughters, Janet, Andrea, and Vivienne, and became a psychologist, practising at the University of Cape Town’s Child Guidance Clinic for many years, until she and Alex moved to Johannesburg in 1978.

Walt continued her psychology practice in Johannesburg, but her true interest became politics, and she eventually gave up psychology to devote her time fully to the Black Sash. Asked once why she hadn’t simply enjoyed the good life, Walt responded: “There’s no choice. You wake up and read the newspaper, and you have to act.”

Much of Walt’s work was concentrated on battling the forced removal of whole communities under apartheid legislation. Accompanied by Trac fieldworkers, sustaining them with the contents of her ever-present picnic basket and thermos of coffee, she drove at all hours of the day and night to places that few South Africans had even heard of. She supported communities in Rooigrond, Driefontein, Mathopestad … and she is immortalised by a map displaying the communities that were under threat. In an effort to educate people and lobby against forced removals,”Ethel,” recalls one-time Trac fieldworker Marj Brown, “spent many hours meticulously drawing arrows from the areas that were under threat of removal in the 1980s to the areas in the homelands they were to be removed to”.

Setting out to a protest stand in the then Bophuthatswana, Walt packed (along with the sandwiches and coffee) a toothbrush, in case the protestors ended up in jail. They did.

Thinking way ahead of her time she co-wrote (with Gita Dyzenhaus) an article published in the Black Sash magazine in August 1980, advocating a Bill of Rights for South Africa.

But she was so much more than the sum of her work and achievements. Warm and empathetic, humorous and loving, an entirely loyal and caring friend, Ethel Walt was a unique human being. Artistic, and a lover of beautiful things, her hands never still, she created exquisite needlework projects — wall hangings, cushions, bedspreads, tablecloths and blankets for her grandchildren. She was a superb cook and an enthusiastic gardener, her flat filled, in season, with the full-blown perfumed roses she nurtured. Her parties were legendary — wonderful food shared by always interesting, opinionated and vocal guests.

She is survived by her husband, Alex, her three daughters and five grandchildren.