‘I live in Europe but I sleep in Africa’ 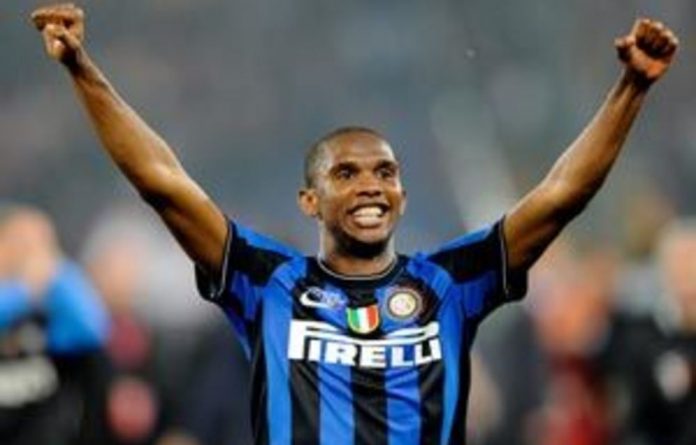 ‘It’s incredible,” Samuel Eto’o says as a dazzling smile lights up his usually serious face and he bangs a table in exultation. “I’ve always had this dream of playing in the World Cup in Africa and it’s about to become a reality. When I’m in South Africa it will be the same as if I’m back in Cameroon. I’ve always said that, even before Cameroon, I belong to Africa. I might live in Europe but I sleep in Africa.”

Eto’o speaks in impassioned torrents of French, sounding as poetic as he is fiery while explaining how his extraordinary journey merges with the wider story of Africa’s first World Cup. After making his international debut the day before he turned 15 Samuel Eto’o Fils left Cameroon for Spain in 1996. He travelled from his hometown of Douala to Madrid, shivering in short trousers when he arrived at Barajas airport, lonely and frightened.

“It seems incredible now,” Eto’o exclaims again, reaching for his favourite word, “but then my whole life is incredible!” His trial led to a contract with Real Madrid, which ultimately entailed little more than being shunted from one Spanish club to another. Eto’o was loaned out to Leganes, Espanyol and Mallorca before, finally, the last of these bought him in 2000. Four seasons on, having won the first of three African Player of the Year awards, Eto’o moved to Barcelona.

Despite suffering terribly from racism, Eto’o established himself as one of the world’s great footballers as he helped Barcelona win three La Liga titles and two Champions League finals.

A few weeks ago, having been transferred last summer to Internazionaleas the Italian club were offered Eto’o and €46-million in exchange for Zlatan Ibrahimovic, he celebrated his first season in Serie A by winning the treble – including yet another Champions League title as his work rate and discipline proved crucial to Jose Mourinho’s tactical masterclass.

“That’s why I’m so proud to be African in this World Cup,” Eto’o says. “Like most Africans I had to work much harder and show much deeper belief than others.

“Most people see Africa only in terms of poverty and war, famine and disease. But this World Cup gives us the chance to show something different. I think the whole world is going to be really surprised by Africa. This could be the best World Cup in history.” Eto’o knocks on a wooden panel at Cameroon’s pre-World Cup base in a French country retreat, 45 minutes north of Paris. “I’m doing that for luck but Africa is ready to show how much joy we can bring to this tournament.”

An hour earlier there had been little joy in Eto’o. He had arrived at a meeting with French journalists like a regal African prince. As he swanned through a sweltering conference room with haughty disdain it had taken less than a minute for him to display real anger. Eyes blazing, he responded to Roger Milla’s recent suggestion that “Eto’o brought lots to Barcelona and Inter but never anything to Cameroon”.

Milla, the star of the Cameroon side that became the only African team so far to reach the World Cup quarterfinals, when they lost to England in extra time at Italia ’90, was Eto’o’s boyhood hero. But the very mention of Milla’s name made him smack the table repeatedly so that a line of tape recorders toppled over in front of him.

“People should respect me and they must shut up because playing in the quarterfinals is not the same as winning the World Cup. My career does not just end in the quarterfinals. I’ve won the Olympic Games [in 2000], I’ve won two Africa Cup of Nations [in 2000 and 2002]. How many Champions Leagues have I won? I don’t need to answer anything.”

He was asked another tremulous question and, again, brought his fist crashing down. “I’m 29 years old and I’ve known glory for seven years. Is Roger Milla a selector? He must shut his mouth. The feelings I had for my idol mean that I can’t say what I really think of him. But I’ve realised the facts and he hasn’t made ­history.”

And with that dismissive snort Eto’o stood up and sent a radio microphone spinning into the air, before striding out of the room.

Anticipation of playing in South Africa
A plan to use his communal exchange with the French press as a gentle warm-up for this, his only exclusive interview before the World Cup, seemed to have been obliterated. It was hard to forget that two years ago this month Eto’o had apparently head-butted a journalist.

This time, eventually, Eto’o was coaxed back into the hotel lounge. And then, in our interview, it was not long before his anger gave way to the anticipation of playing in South Africa. Eto’o began to emerge as a far more engaging man — far removed from the seething figure he had been in a formal media setting.

But why had Milla so upset him? “It’s the same before every tournament. We get some bitterness from older players. That’s a shame.” Milla’s criticism was made with specific reference to Cameroon’s disappointing Africa Cup of Nations earlier this year.

“It’s true we didn’t do well,” Eto’o says, “but we need to write a better history in this World Cup. It’s time for us to prepare mentally because the World Cup is played as much in the head as [with] your legs.”

How closely had Eto’o followed Cameroon, and Milla, in 1990? He beams again. “I was nine years old and after every match I’d run around the streets of Douala. But watching that game again in later years, as I sometimes still do today, I think the world wasn’t ready for an African team to reach the semifinals.”

Eto’o harbours a more personal resentment from his World Cup debut in France in 1998. He was the youngest player in the tournament, at 17, and he has not forgotten the experience. “It was very traumatising because we needed to beat Chile to make the second round – and we had two penalties refused. We were knocked out and France went on to win.”

Does he believe some officials might still subconsciously favour the more traditional European and South American powerhouses over the six African teams? “I’m still a player,” Eto’o, says smiling. “I can’t say that sort of thing. We’ve covered a lot of ground in the past 20 years and in Europe so many leading players are African. If we prepare properly, then one of the African teams can do something special.”

As a reward for their qualification Eto’o presented each squad member with a watch reputedly worth €29 000.

The distance between such grand largesse and his humble arrival in Madrid 13 years before is stark. “I never forget it. In the moments before I went out for the Champions League final last month I thought about that day again. It helped calm my nerves and make me appreciate how far I’ve come. I came to Madrid on a freezing winter day, in short trousers and a T-shirt. I was with another African kid, a guy from Nigeria [Antonio Olisse]. He broke his leg and didn’t make it. But we stayed in touch because I don’t forget. It’s always been a very tough journey for African footballers in Europe – and it’s still tough today.”

Eto’o was subjected to racism throughout his career in Spain. “I suffered a lot. I’ll be a bit rude here but those who come to the stadium to whistle at me and make monkey chants and throw banana skins have not had the chance to travel and educate themselves like we did.

“I had to deal with it so often I found ways of making a point against racism. When we played Real Zaragoza they chanted like monkeys and threw peanuts on the pitch. So when I scored I danced in front of them like a monkey. And when the same thing happened against Real Madrid I scored and held my fist in a Black Power salute.”

When he joined Barcelona he said he would “run like a black man to live like a white man”. Eto’o nods at the memory: “People didn’t really understand the deep meaning of my words. Some treated me as a racist but the reality was there. What I was trying to say is that [as an African] I need to do more than others to be recognised at the same level.”

Will the first World Cup in Africa help eradicate these last festering outbreaks of racism in football? “I hope so,” Eto’o says, “but I suffered a lot in Italy this year. So it’s not just one country where there is racism. But to obtain these rewards you have to go through that.

“And that’s why it’s incredible we’re playing in the country where my idol, Madiba [Nelson Mandela], lives. I had the honour of being at his 89th birthday and had 10 minutes of private conversation with him. It was one of the most amazing things that ever happened to me.”