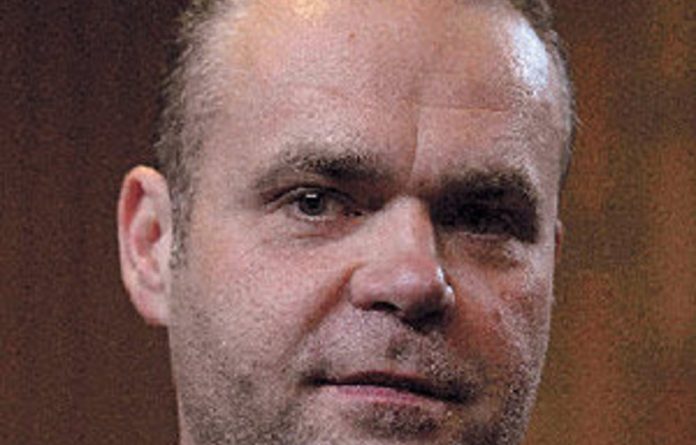 What is the relationship between Czech fugitive from justice Radovan Krejcir and senior crime intelligence officer Major-General Khanyisa “Joey” Mabasa?

Krejcir’s wife, Katarina, and Mabasa’s wife, Dorcas, established a company together last year, according to an investigation by the Mail & Guardian. Companies office records show that Katarina Krejcirova and Dorcas Mabasa became co-directors of a company called Radlochron in October 2009.

Krejcir, wanted in the Czech Republic and fighting a drawn-out battle to block his extradition, declined to comment. Mabasa said that he and his wife were separated “for the past 15 years”.

But credit records for Khanyisa and Dorcas Mabasa show that they have both given the same home addresses for the past four years. They are both still reflected as owners of a house in Lenasia. Asked how his wife met Katarina Krejcirova, Mabasa said: “I don’t know.”
But he confirmed that he was aware of her connection with Krejcirova after recently being approached by two journalists, who brought up the issue. He said he raised the matter with his wife last month, “the last time I saw her”.

“I told her that, because she still carries the same surname, I will be connected to what she does,” he said.

Mabasa claimed not to have Dorcas’s phone number, but when the M&G contacted her, she, without being told of the M&G‘s conversation with her husband, said: “My husband and I are separated. He’s telling the truth that we are separated.”

She then terminated the conversation and could not be reached again.

At the time of the Jackson shooting, Mabasa told the M&G that Smith probably called him because Smith had been a police informant in a money-laundering investigation three years before. This came to an end when the police found Smith was a drug abuser.

“I don’t know why he called me,” Mabasa said, “I couldn’t even ­remember who he was.”
But Smith was a key cog in the money-laundering operation allegedly involving Krejcir and Jackson and would have featured in any investigation of either man.

Mabasa and Smith allegedly agreed to meet at the Bedford Centre in Bedfordview. But Mabasa was delayed and, when the police arrived at the rendezvous, Smith was nowhere to be found. He is still missing and the police will not disclose any information on progress in the Jackson murder case.

However, intelligence sources have suggested that Krejcir has managed to sell himself — and buy protection — as an intelligence asset to crime intelligence and the South African Secret Service (Sass).

The Star reported in May that security consultant Cyril Beeka was in contact with Smith and Krejcir. Beeka is known to be close to Sass head Moe Shaik.

Krejcir is adept at manipulating political and state institutions. In an affidavit for his extradition battle in 2007, Krejcir claimed he had agreed to advance 60-million crowns (about R20-million) for the election campaign of Czech Social Democratic candidate Stanilav Gross in 2002.

Krejcir openly admits that the quid pro quo was for him to gain control of the state oil company, Cepro.

“In return Gross undertook to pass control of Cepro to me in the event that the election was successful.”

The deal was supposedly facilitated through Jakub Konecny, whom he describes as “an intermediary with Gross”. Krejcir says he obtained promissory notes to back up his “loan”.

“In 2002 Gross won the election and became prime minister. I approached Gross via Konecny to obtain control of Cepro. Gross, however, informed me he had no intention to honour the agreement. I was outraged and threatened to go to the media — shortly thereafter I was arrested on a trumped-up charge of fraud.”

Gross, later forced out of office after unrelated sleaze allegations, denies Krejcir’s version. The Czech police claim to have evidence showing that Krejcir gave instructions much later for the fabrication of “promissory notes” to back up his version.

The Prague High Court has since convicted Krejcir in absentia for ­masterminding Konecny’s kidnapping in April 2002.
Konecny, a Krejcir associate, was allegedly suspected of being a police informer. He was abducted and brought to a leased office where, in Krejcir’s presence, he was forced to sign blank promissory notes, empty sheets of paper and tax documents.

Konecny, expected to testify against Krejcir, disappeared in 2005. Krejcir blames state agents whom he says tried to protect Gross.
Krejcir is accused of since gaining control of Cepro by subverting its management and manufacturing a bogus claim of billions of rands against the state company. The claim was nearly paid out and was overturned only by the Czech appeal court.

Krejcir fled to the Seychelles in June 2005 during a police search of his house. Questions have been asked about how he obtained citizenship and a new identity there.