Vavi may still be hauled over coals 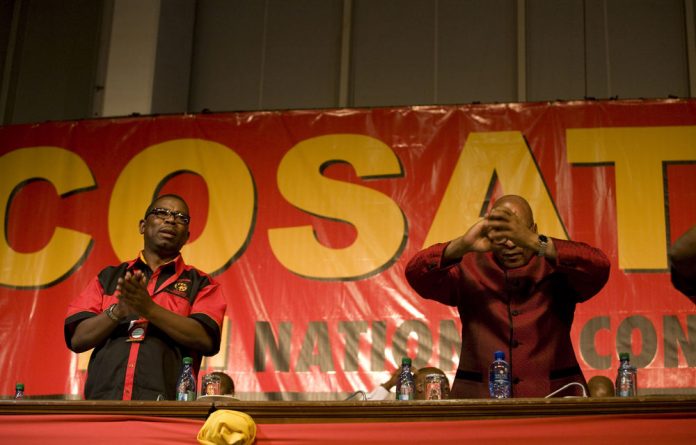 The Mail & Guardian has reliably learned that the ANC’s national working committee (NWC) has instructed the party’s top six officials to deal with Vavi’s case.

This is despite the suggestion that came from the NWC meeting in Limpopo on Monday that the ANC had dropped all discussions about sanctions against Vavi.

The decision to refer the matter to the ANC top six came after NWC members could not agree on the way forward, according to ANC insiders.

NWC members sympathetic to Vavi argued for the dropping of charges on the basis that his remarks — in which he criticised Zuma for failing to act on corruption allegations against his Cabinet ministers — were made on Cosatu’s behalf.

But other ANC leaders, including deputy president Kgalema Motlanthe, insisted that Vavi should face the music in his capacity as a member of the ANC.

“NWC members had different opinions, with some saying he can’t be charged because he was speaking on behalf of Cosatu. Kgalema made it clear that all ANC members should be subject to the party’s constitution,” a senior ANC leader said this week. The ANC would neither deny nor confirm whether the matter had been referred to the ANC’s national office-bearers.

Said ANC spokesperson Jackson Mthembu: “We haven’t said anything [public] about the charges, so I can’t comment on that.”

Cosatu president S’dumo Dlamini told the M&G the federation had yet to receive any communication from the ANC on the Vavi matter, despite the fact that Vavi last week wrote a letter to ANC secretary general Gwede Mantashe seeking clarity on the party’s intentions.

“We’re still standing where we were last week. We’ve received nothing from the ANC. How they handle their own hot potato is up to them. We remain unshaken,” said Dlamini.

Asked about Motlanthe’s reported view that all ANC members should be subject to the party’s constitution, Dlamini said: “We don’t know what that means. I know how the constitution of the ANC binds me as a member. But it doesn’t say anything about charging a leader of Cosatu or any of the ANC’s alliance partners.”

Dlamini said Vavi’s case was not on the agenda of the alliance’s political council this week, attended by ANC, Cosatu and SACP leaders.

Cosatu leaders believe that the move to charge him is driven by those who did not want him to take a leadership role in the ANC. Last year Vavi announced publicly that he would not restand for the general secretary’s post when his term ends in 2012, but would prefer to serve on the ANC’s NEC.

Meanwhile, some Cosatu sources accuse Vavi of lobbying for his allies to take over crucial leadership ­positions in the federation.

He was alleged to be pushing for Cosatu’s KwaZulu-Natal secretary, Zet Luzipho, to replace his current deputy, Bheki Ntshalintshali, in the next few months.

The sources said that at a Cosatu central executive committee (CEC) meeting last week, Vavi proposed that Ntshalintshali should be seconded as deputy secretary to the International Trade Union Confederation (Ituc), which holds elections at the end of the month. Ntshalintshali is said to be unhappy that Vavi raised the matter during the CEC meeting before national office bearers had discussed it.

Ntshalintshali confirmed that the Cosatu CEC had discussed his possible move to the Ituc, but said the matter had not been finalised. Dlamini refused to comment on this matter.

Vavi is understood to want Fikile “Slovo” Majola, Nehawu’s general secretary, to succeed him when his term ends. Although National Union of Mineworkers leaders have lobbied for NUM general secretary Frans Baleni to replace Vavi, his supporters fear that this would hand the federation to the ANC, as Baleni is close to Mantashe.

Mantashe and Vavi are broadly in alliance in the battle between the ANC’s nationalist and leftist wings, but they have clashed over policy in recent months, including about whether the alliance or the ANC should be the political centre; the party’s investment arm, Chancellor House; and strikes by Cosatu members.

The M&G understands that the National Union of Metalworkers has resolved that its general secretary, Irvin Jim, a potential replacement for Vavi, should remain in Numsa.