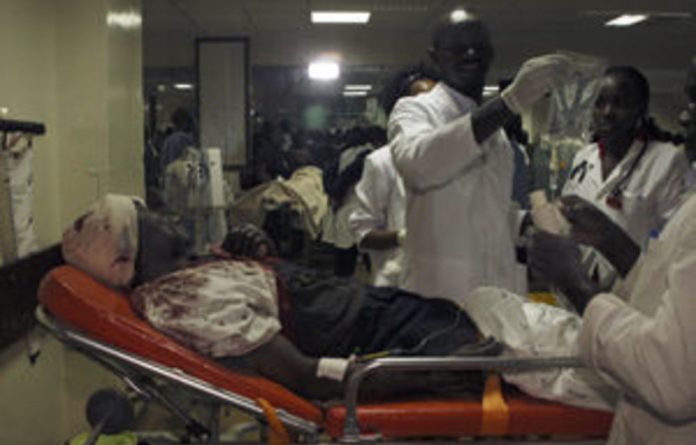 Two explosions ripped through a rally against a proposed new constitution for Kenya being held in the centre of Nairobi on Sunday, killing at least five people and injuring 79, officials said.

It was the most serious incident in the east African nation since the violence that followed disputed elections in 2007 left 1 500 people dead and 300 000 displaced from their homes.

Panic gripped the crowd in Uhuru Park in the heart of the capital when the blasts went off during prayers at the end of the rally, called by evangelical Protestant churches, Nairobi police chief Anthony Kibuchi told Agence-France Presse.

‘An isolated incident’
“There were two explosions in the middle of the crowd,” he said.

“This is an isolated incident, but it is unfortunate we have lost three lives,” Prime Minister Raila Odinga told reporters after visiting some of the injured at Kenyatta national hospital.

“The government will do everything to apprehend the perpetrators,” he said, adding however that the incident “should not be linked” with the planned August 4 referendum on the draft revised constitution.

Peter Wanyoike, a doctor at Kenyatta national hospital, later confirmed that a total of five people had died, while another five were fighting for their lives.

“Two more people have just succumbed to injuries, and the death toll is now at five,” he told AFP.

“We have five people who are in a critical condition and some of them are already in the [operating] theatre.”

Appeals for calm
Police sealed off the vast park as ambulances converged on the scene, then sped away to take the casualties to various hospitals.

Several thousand people were attending the rally, where organisers and speakers appealed for calm from the podium.

Inside one hospital, some of the bloodstained victims appeared unconscious, lying on stretchers on the floor of the emergency ward. Their injuries were mainly to their legs and lower torsos.

It appeared that an explosive device had been thrown at the crowd, police chief Kibuchi said, while survivors thought hand grenades had been used. The blasts were said to have gone off 15 minutes apart.

“We will get to the bottom of the matter,” said Internal Security Minister George Saitoti, as he announced that a police investigation is underway.

“We do not want to speculate … We cannot tell the kind of devices that were used … but we will know in due course,” he added.

Kenya has been striving to chart a new political course after the 2007 elections which shattered its reputation as an island of stability in the otherwise volatile Horn of Africa region.

But the international community has expressed concern that Kenya — which expects another general election in December 2010 — has made little progress on political reform and combating corruption.

“Putting in place a new constitution and strengthening your democratic institutions and rule of law will further open the door to major US development programmes and investment from US corporations,” he said.