Funky ha-ha from half a Dadaist 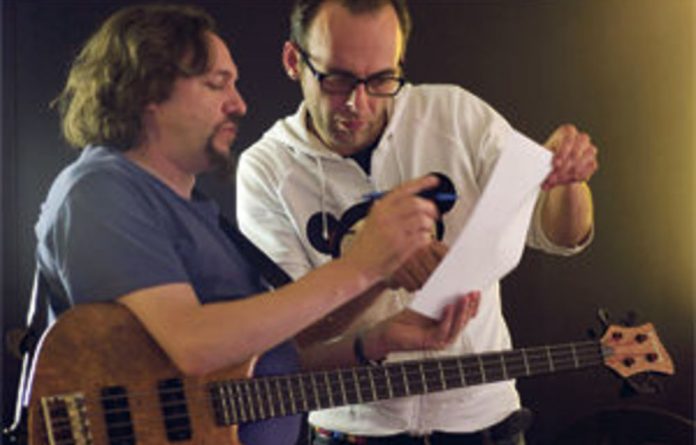 When I first saw that Paris/Joburg consisted of four (later five) wind instruments, two drummers, two vocalists and a bassist, my heart sank just a little. I was hoping there would be some electricity — a synth or an electric guitar. But once the music began, my fears were put to rest.

Carlo Mombelli wields his Prisoners of Strange ensemble to electric effect and the textures that emerge are subtle and nuanced, sometimes quite loud and raucous, and always interesting.

I saw the Paris/Joburg performance, which featured Mombelli’s band with Braka’s French Quartet, live at Wits University on June 6. The band has in its ranks one-and-a-half Dadaists. The French composer/percussionist Braka, who quadruples as clown, MC, trombonist and DJ, is the full-blown Dadaist. He injects humour and warmth into the proceedings, while Mombelli, the half Dadaist, plays with the music as well as with the audience’s expectations. Delighted by Braka’s antics, Mombelli is bemused when surprises are launched — in-jokes are rife within this band.

Indeed, humour is an essential element of the band’s apparent spontaneity. Mombelli is undoubtedly the leader, but the members playfully simulate a kind of power struggle, reflecting their anarchist leanings. And the arrangements betray an irreverent concept of unity, belying the labour that goes into such a tight performance.

Jump cuts, shifting time signatures, contrasts in volume, tone, note and timbre — all these are performed with great technical facility, and a certain eclecticism of structure allows jazzy elements to mingle with Edith Piaf and vocal motifs from Stockhausen’s Stimmung. But it’s all ultimately held together by compositional acumen — and great bass riffs.

The wind instruments produce especially interesting textures, roaring together or creating soft and mournful chords, sometimes breaking the smooth surface with syncopated toots from Nicolas Stephan on alto sax and hoots from Daniel Malavergne on the tuba. Meanwhile, the two singers, French chanteuse Lucia Recio and Siya Makuzeni (who also doubles on trombone), explore the vocal range in both harmonious and atonal concert.

French cultural memes pervaded the concert, which was organised as part of a South Africa-France exchange by the French Institute and associated organisations. But I failed to discern the Sophiatown theme, which Braka referred to post-performance.

The piece about humour, with Recio leading an Indian seminar in laughter, worked well, evoking mirth in the band as well as in the audience. Drummer Justin Badenhorst’s solo in the penultimate piece seemed influenced by a solo from Billy Cobham’s Spectrum, an influence well worth embracing and developing. Trumpeter Marcus Wyatt and Stephan blew enjoyable solos, while Braka laughably proved a competent trombonist. When Mombelli’s bass strayed from its rhythmic function, Malavergne’s tuba filled the vacuum and he revelled in turning his unwieldy instrument into a source of strange.

Mombelli’s music continues the tradition of the avant-garde, keeping in mind that the avant-garde was modernism’s assassin, enlisted to murder tradition. As such, he makes music that reproduces the sounds, methods and aesthetics of a music that shocked listeners, especially from the 1950s onwards. But if once upon a time these elements were shocking, today they tend to border on cliché — perhaps only for those long in the tooth. The young people at the concert seemed entranced and for some it was their introduction to the avant-garde — laudable in an age kicked off by the Spice Girls and now dominated by that dreadfully pornographic pop “avant-gardist”, Lady Gaga. A battle for the soul of the avant-garde, perhaps?

After the concert one twenty­something said she had been overwhelmed at some moments, but found the provocations of the tuba attractive. She seemed to have enjoyed the overall experience. That is perhaps the function of Mombelli’s intervention: to continue to reopen the closures imposed on us at every turn and to remind listeners that the avant-garde tradition isn’t dead, it just smells funny.