Humble Henry learns to live on fringes … for now 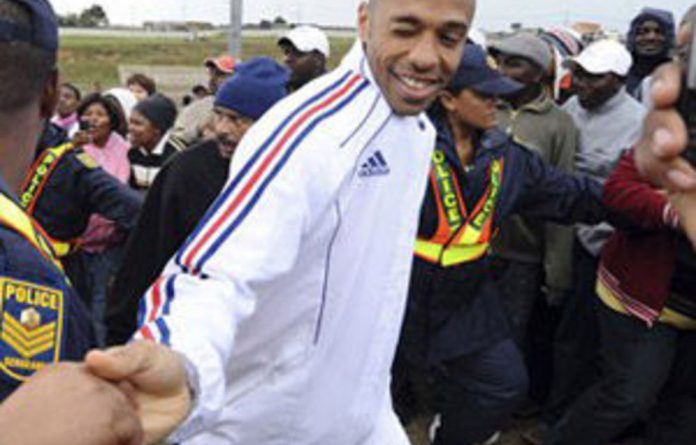 When the France players visited a township on Sunday, the man all the excited, vuvuzela-blowing children wanted to touch was the World Cup’s most famous substitute, Thierry Henry.

Looking a bit lost and almost surprised at still being the centre of attention, Henry humbly obliged and signed a few autographs.

Since he has arrived in South Africa, the 32-year-old has had to live through an entirely new, once unconceivable experience.

Not only did he start on the bench in France’s opening 0-0 draw against Uruguay in Cape Town on Friday but he has also had to train separately with the other substitutes, all that without grumbling.

Until a few weeks ago, Henry, France’s most prolific scorer with 51 goals from 122 appearances, was not only the team’s most decorated player but also their captain.

The only squad member who was in France’s 1998 World Cup-winning party, although he did not play the final, Henry has also become the first French player to take part in four World Cups.

His season, however, has been a tough one. Pushed on the fringes at Barcelona and hurt by the outcry sparked by his infamous handball in a controversial play-off win over Ireland, Henry is now in the twilight of his illustrious career.

True professional
“I don’t know if he accepts all this that easily,” defender Eric Abidal, Henry’s teammate at Barca, told reporters at France’s World Cup base in Knysna, Western Cape.

“He’s had a difficult season at Barcelona but he’s a true professional. Football is a team sport and that’s what his attitude here is based on. It’s important for us to have him on the team.”

One of the finest strikers of his generation, the man who has often lifted France out of tight spots and achieved immortality among Arsenal fans by scoring 226 goals during his eight-year spell at the London club has become second choice.

In France’s three warm-up games and in their World Cup opener, he left his place up front in the starting line-up to Nicolas Anelka and his armband to left back Patrice Evra.

“There’s a logic in football,” Henry told reporters in the only time he came to meet them since the start of France’s World Cup preparations.

“Over the past four months I have not played that much. There’s a player in front of me and that’s Nico. I accept that.”

Things could soon change, however. Anelka has been disappointing in all warm-up games and against Uruguay, making Henry an interesting option for France coach Raymond Domenech.

The ageing marksman could still make an impact at this World Cup. If that happens, the kids from the Knysna township will cherish their autographs even more. – Reuters