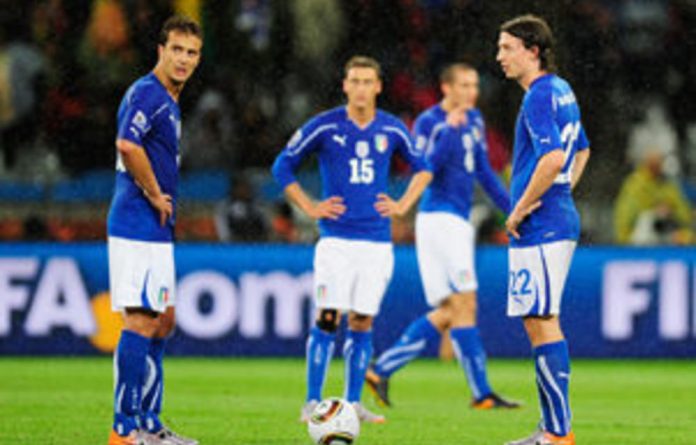 Italy got their title defence off to a stuttering start on Monday when they needed to come from a goal down to draw 1-1 with Paraguay in their World Cup opener.

The four-time champions came into the match at Green Point Stadium under pressure after a underwhelming build-up and they had to dig deep to salvage a point.

De Rossi redeemed himself by grabbing the equaliser eight minutes into the second half, making the most of goalkeeper Justo Villar’s failure to clear a corner to put the Italians back into the game.

Slow starters
Italy, who are often slow to start at big tournaments, turned up the heat after their goal and they could have had more, but Paraguay clung on to share the Group F spoils.

Italy had the first sniff of goal after five minutes when the ball bounced kindly for Riccardo Montolivo who shot on the half-volley but it was charged down by Paraguayan defenders.

Lippi’s team were in charge early on, making all the running and looking dangerous on the break as the rain poured down.

Vincenzo Iaquinta sent in a teasing cross but Alberto Gilardino couldn’t get his head on the end of it as they ramped up the pressure.

Paraguay only started to come alive on 20 minutes, and some good build-up saw Torres have a punt from distance only to see the ball squirm well wide.

At the other end Montolivo, playing in place of injured AC Milan playmaker Andrea Pirlo, broke free down the middle but could only deliver a weak shot that went straight at the Paraguay keeper.

Iaquinta was in the action again soon after and should have done better from inside the six yard box but was hounded off the ball before Alcaraz got the breakthrough by getting on the end of a Aureliano Torres cross.

Taking charge
Italy came out for the second-half without veteran goalkeeper Gianluigi Buffon, who apparently had a lower back problem.

Federico Marchetti replaced him and he was busy early on with Enrique Vera going close on 53 minutes.

Italy though started to take charge and Montolivo got a shot on target before they won the corner that led to the goal.

Simone Pepe curled the ball into the box and Villar failed to connect with his punch, leaving the unmarked Di Rossi to bury it in the back of the net.

The goal proved a tonic and they went close as they pressed for the winner, with Pepe having the best chance, only to see his powerful long range drive kept out by Villar.

Japan shock Cameroon
Another underdog, Japan, did pull off a minor upset, shaking off a run of miserable form to defeat Cameroon, one of the brightest hopes for African success, 1-0.

So far, only Ghana from the continent have won in the opening round of games in Africa’s first World Cup.

In Monday’s other match, the Dutch notched a comfortable 2-0 victory against Denmark but failed to show the exciting, attacking football for which they are renowned.

Netherlands went ahead courtesy of a freak own goal when Simon Poulsen’s header from a Dutch cross rebounded off fellow defender Daniel Agger and rolled into the net.

Dirk Kuyt scored the second in the dying moments.

The surprise of the day, though, was Japan, whose terrible form in the build-up had led to assumptions the Asians would be easily dealt with by Cameroon’s “Indomitable Lions”, including three-times African Player of the Year Eto’o.

Cameroon, hoping to recapture the form that took them to the quarter-finals in 1990 and one of Africa’s best hopes for a long run in the tournament, were largely a disorganised mess and repeatedly failed to feed their front three.

Japan came to the game in the chilly central city of Bloemfontein after a run of just one goal from their previous five matches including a 0-0 draw against Zimbabwe last week, organised at late notice supposedly to chalk up a comfortable confidence-building win for the Asians. — AFP, Reuters

Covid-19 numbers are prompting disaster declarations and dramatic action across South Africa this week. All steps should be directed by numbers
Read more
Advertising
Continue to the category
Education