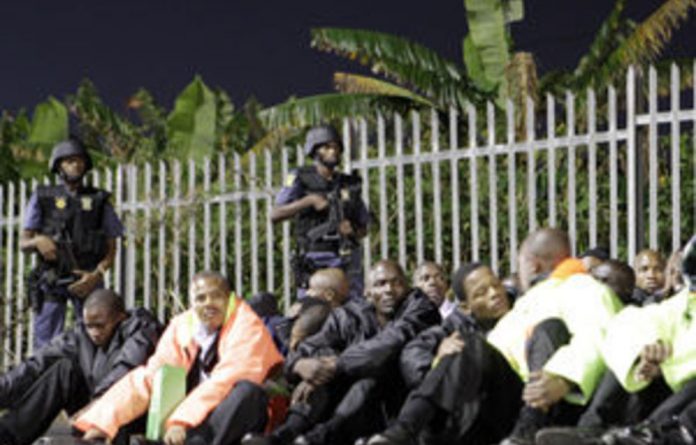 Armed riot police charged into hundreds of security stewards at a Soccer World Cup stadium in the early hours of Monday morning to break up a protest about low wages.

Police appeared to set off two percussive grenades, causing loud bangs, to drive the workers out of a parking lot under the Moses Mabhida Stadium in Durban hours after Germany beat Australia 4-0 in Group D.

Associated Press reporters saw about 30 riot police charge into the crowd to drive it out of the stadium. While calm quickly returned to the stadium, some of the security stewards, wearing orange and green jackets, continued milling around outside.

An AP photographer said police fired tear gas at protesters outside the stadium. A nearby street was littered with trash where the protesters were forced away. Concrete blocks had been pushed into a street.

About 100 police later surrounded a group of about 300 protesters on a street near the stadium and separated the men from the women. An AP photographer said he heard police tell the protesters they would be arrested for causing a public disturbance.

Repeated calls to police in Durban seeking comment were not returned.

No comment
Fifa and the local organising committee for the World Cup did not immediately respond to telephone calls or emails seeking comment.

Durban police on Monday vowed to arrest those who led the protest.

“We are busy investigating and we believe that some will be arrested soon because they are known,” Brigadier Phindile Radebe said.

“The police managed to move them away from the stadium, but they regrouped and continued with the protest.”

Police were called to the scene after hundreds of angry stewards gathered to complain about their wages.

“We left our homes at seven in the morning and now it is nearly 1 o’clock,” said Vincent Mkize. “In the dry run, they didn’t want to tell us how much we would get.”

Another of the stewards, Fanak Falakhebuengu, told the AP he had heard they would be paid R1,500 a day but were only getting R190.

“They were supposed to give us R1,500, that’s what Fifa told us and they gave us R190. We are working from 12 o’clock until now,” said another man who asked not to be named. He ran from police before he could give his name.

Many of the protesters were waving small brown envelopes that had held their pay. One handed to a reporter had the figure R190 written on it under “amount payable”.

Others said they had been abandoned at the stadium after the match and would have to walk about four hours to get home. They said no transport was provided for them. — Sapa-AP