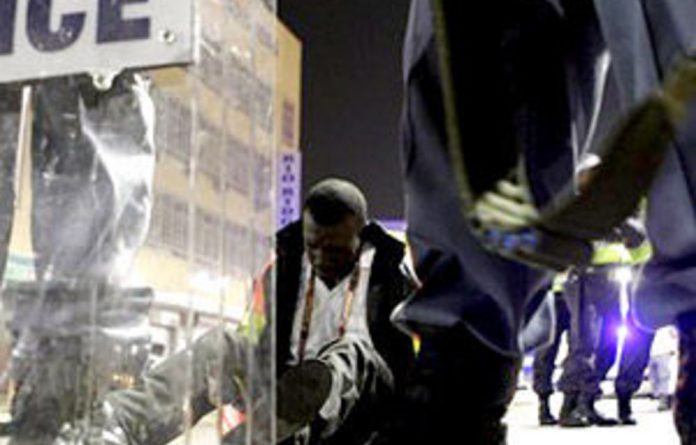 Several people were injured when protesting security guards threw bottles at the office of a security manager at the Moses Mabhida stadium in Durban, at 1.30am on Monday, police said.

“Security guards hurled bottles and other objects at the office of the security manager, which struck some of the staff, causing slight injuries,” said Brigadier Phindile Radebe.

She said about 500 guards went on the rampage, overturning refuse bins and throwing objects at police after the game between Germany and Australia.

Security guard Fanak Falakhebuengu was quoted as saying that he had heard guards would be paid R1 500 a day, but they had only received R190.

Radebe said spectators had already left the stadium when the protest started.

“The police managed to move them away from the stadium, but they regrouped and continued with the protest.”

Police fired rubber bullets at them. “Minimum force in accordance with the situation was then used to disperse the group from the stadium,” she said.

The security guards were hired by Stallion Security, which had received a tender from the local organising committee.

Radebe said the police and the security company had contingency plans in place to ensure that the next game at the stadium would not be compromised.

“The Moses Mabhida stadium is owned by the city of Durban. The stadium, however, was handed over to the organising committee and Fifa on 24 May 2010,” he said.

He said the two organisations were responsible for all elements of the operation and management of the stadium and the appointment of all stadium service providers and employees.

“The organising committee appointed Stallion to provide stewarding services at the Moses Mabhida Stadium and were responsible for the terms and conditions of their appointment,” he said.

Danger for Italy
Defending champions Italy play for the first time on Monday, hounded by a wave of negative reporting that says they are too old and lack pace and imagination.

They meet an in-form Paraguay in Cape Town in the evening and few give the ageing side a chance of retaining their title.

Italian coach Marcello Lippi’s insistence on keeping faith with the bulk of the team that won in Germany four years ago has angered Italian fans and sports reporters alike.

Combined with a tradition for infuriatingly slow starts they could be in danger from Paraguay side, brimming with confidence.

While Italy will have to transform their recent displays to convince, all the top teams got a severe warning of the danger from a young German side in the most convincing win of the tournament so far on Sunday night when they overran Australia.

British bookmakers immediately cut the odds on Germany taking their fourth World Cup to 9-1 from 12-1.

The Netherlands, who are brimming with confidence and another of the tournament favourites, will meet an injury-hit Denmark in Monday’s first match at Soccer City in Johannesburg.

After winning all their qualifying matches and showing strong form in their warm-ups, the biggest enemy for The Netherlands could be over-confidence, although manager Bert van Marwijk is fast building a reputation as the tournament curmudgeon.

So far, his list of complaints includes the new Jabulani tournament ball, the fans’ deafening vuvuzela trumpets and the hardness of the pitches.

But he is blessed with one of the tournament’s most deadly strike forces of Robin van Persie, Wesley Sneijder, Rafael van der Vaart and winger Arjen Robben, although the latter will be out of the Denmark match with a hamstring injury.

The Dutch have not lost to Denmark for 43 years — apart from a penalty shoot-out defeat in the 1992 European Championship finals — but the Danes believe they can possibly catch their opponents napping as the underdogs with nothing to lose.

In the other Group E match on Monday, Cameroon’s Indomitable Lions, one of the tipped African teams, will expect victory against Japan, who have never won a World Cup match on foreign soil and are struggling to score goals.

Cameroon, who thrust African soccer power into the spotlight in the 1990 World Cup by reaching the quarter-finals, will be spearheaded by striker Samuel Eto’o, one of the continent’s finest players.

They will hope to emulate Ghana, another African favourite, who secured the continent’s first victory in Africa’s inaugural World Cup finals on Sunday with a 1-0 win over Serbia through a late and well-taken penalty by Asamoah Gyan.

The match transformed Pretoria’s Loftus Versfeld stadium, usually a temple to rugby, into a theatre of African football, with the Black Star’s fans dressed in striking outfits in the national colours of green, yellow and red, jiving throughout to the sounds of vuvuzelas.