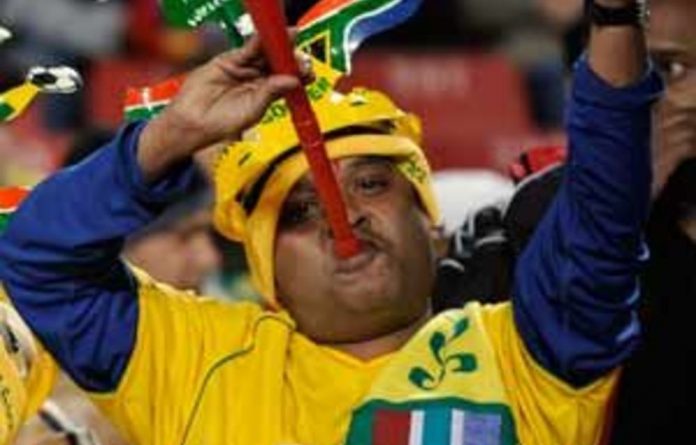 The BBC is examining whether it could transmit a “vuvuzela free” version of its Soccer World Cup coverage after a flood of complaints from viewers about the controversial instruments, a paper reported on Tuesday.

The British broadcaster has received 220 complaints about the noisy monotone trumpets and is believed to be looking at how it could provide a “clean” feed with most of the crowd noise stripped out, said the Guardian.

Option to mute
Spectators of matches broadcast by the BBC annoyed at the vuvuzelas would have the option of turning off the crowd noise at the tournament being held in South Africa, according to the paper.

The news came amid continued controversy over the instruments, which have also been criticised by fellow broadcasters and some players.

But despite annoying some viewers, the trumpets were proving popular in Britain. Large numbers flew off the shelves in the run-up to England’s first World Cup match against the United States on Saturday.

Flying off the shelves
Supermarket Sainsbury’s sold 22 000 of the instruments in 12 hours before the match and online retailer Amazon said sales had skyrocketed 1 000%, retailing for just under $10 each, reported the Guardian.

“It seems like the bad publicity has been good for us,” said Brandon Bernado, owner of the vuvuzela.co.za website and a factory he said could churn out at least 10,000 of the instruments every day.

“We’re completely sold out. Every time we manufacture more, the next morning by nine we’re sold out,” he told Reuters.

Speculation that the horns, whose buzzing has been compared to a hornets’ nest, could be banned at the tournament was quashed on Monday when Fifa president Sepp Blatter ruled out the possibility.

“I don’t see banning the music traditions of fans in their own country. Would you want to see a ban on the fan traditions in your country?” Blatter wrote on micro-blogging site Twitter.

This was echoed by the local organising committee.

The possibility of the vuvuzela’s being banned was sparked by an interview given by the chairperson of the tournament’s South African organising committee, Danny Jordaan, who suggested that action will be taken if they are blown during the singing of national anthems. — Sapa-AFP, Reuters